“Complete Chaos” Was The Word From Ticos Living in Boston 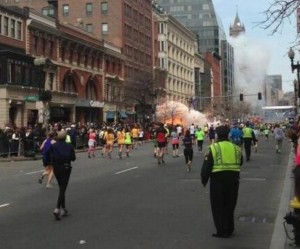 According to the Boston marathon’s official website, at least 29 Costa Ricans participated Monday in the competition where two explosions occurred near the finish  line.

Costa Rica’s Foreign Ministry said on Monday it is investigating if any Tico was present at the scene of the blast, and if there were any injuries.

To do this, an official from the Costa Rica embassy in New York will be traveling to Boston, to provide assistance to any Costa Rican affected by the incident that left two dead and more than 150 injured.

In Costa Rica, deputy Foreign Minister, Carlos Roverssi, assured the families of Tico in the Boston race, they would do eveything possible to assist in communication with family, and if necessary help with the transfer to a medical facility.

“The city is in complete chaos and is totally paralyzed”, were the words of Esteban valverde, a Costa Rican living in Boston for the last 13 years.

Local news television reports included a number of telephone interviews with Costa Ricans in Boston, and CNN en Español showed video footage of Ticos who were taking part in the marathon and affected by the event.