MIT’s “Hot or Not” Site for Neighbourhoods 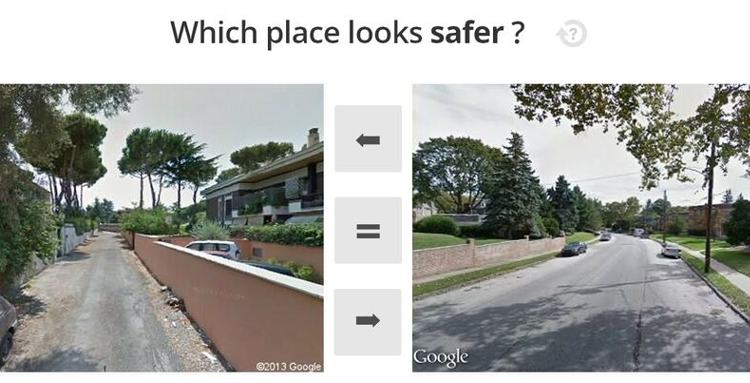 When you walk around a city, there are things you can just sense, like if you’ve wandered into a bad neighborhood. A traveler visiting Rio, Manila or Caracas, does not need a report to learn that these cities are unequal; she can see it directly from the taxicab window.

This is because in most cities inequality is conspicuous, but also, because cities express different forms of inequality that are evident to casual observers.

Until now, however, our ability to understand the effect of a city’s built environment on social and economic outcomes has been limited by the lack of quantitative data on urban perception.

Researchers from MIT Media Lab may have found a way to measure this “aesthetic capital” of cities, with their website Place Pulse, a tool to crowdsource people’s perception of cities by judging digital snapshots

—a sort of “hot or not” for urban neighborhoods.

Some 4,000 geotagged Google Streetview images and 8,000 participants later, the team found that by using digital images and crowdsourced feedback, they can accurately quantify the diverse vibes within a city, which in turn can help us better understand issues like inequality and safety. The results were published yesterday in the journal PloS One.

The results could be used to someday map the intangible uniqueness of neighborhoods around the world, which could help improve neighborhoods and design future cities.

The data could also add some weight to the controversial “Broken Windows Theory,” which suggests that physical signs of disorder in a neighborhood—like broken windows—can lead to crime, causing a vicious cycle. The theory has been hotly debated since it came out of Harvard in the 80s, partly because it’s hard to actually measure and quantify “disorder.”

The Place Pulse experiment could change that. From the study:

Cities are not just collections of demographics, but places that people experience. Urban environments are known to elicit strong evaluative responses, and there is evidence and theories suggesting that these responses may affect criminal and health behaviors. Yet, we lack good quantitative data on the responses elicited by urban environments. Place Pulse is an effort to help collect quantitative data of urban perception to help advance these research efforts and open new avenues of research.

In other words, there’s more to measure in a city than just demographics and income. Things like energy level, architecture, beauty, and so on can impact people’s social behavior. While Place Pulse 1.0 was a small experiment—it looked at images from just four cities, Boston and New York in the US and Salzburg and Linz in Austria—the method proved effective enough to be worth exploring further, according to the report.

Now MIT has expanded the study out to 56 cities around the world, with more than 100,000 geotagged images. Place Pulse 2.0 also measures more characteristics, looking at how boring, depressing, lively, safe, and wealthy the cities seem.

The team wants to use this second, larger dataset to train machine learning algorithms to understand what kind of features in the photos lead humans to answer the way they do—in a sense, to teach computers intuition, so the research could scale.

The Place Pulse experiment is simple. Like Mark Zuckerberg’s infamous pre-Facebook FaceMash site, it shows two images side by side and asks people to answer questions like “which place looks safer?” or “which place looks more upper-class?”

With a larger dataset, being analyzed by learning machines, the findings could be used to design the city of tomorrow. “Ultimately, the goal of this study,” researchers wrote, “is to contribute to our understanding of the urban environments that we have built, with the goal of improving them, and their ability to include their citizens, while also informing the construction of future cities.”

QCOSTARICA - The OIJ uncovered a big pothole on Monday when it was announced that public officials had allied with construction companies that, apparently,...
Economic Recovery

QCOSTARICA - Despite the improvement in tourist arrivals reported in May, with more than 72,000 visitors, both the Cámara Nacional de Turismo (Canatur) and...
Disasters