Moms And Babies Took To The Streets For Longer Breastfeeding 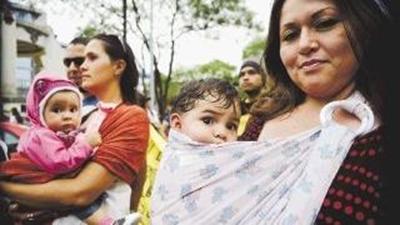 Moms and babies, including strollers and baby bottles, paraded on Friday through downtown San José in support of an initiative to extend maternity leave to six months from the current three. 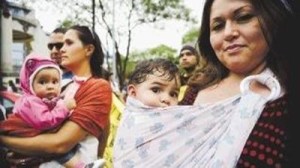 The walk began at the north side of the Catedral Metropolitana to the Legislative Assembly building several blocks away. Joining mothers with their babies wer also pregnant women, grandparents and some parents.

The unusual march was to call attention to the iniative. Currently, mothers to be have one month paid leave before the child is born and then three months after childbirth.

The cost of the paid leave is shared between the employer and the Caja Costarricense de Seguro Social (CCSS) or Caja – social security.

The initiative to extend the maternity leave is based on a recommendation by the World Health Organization (WHO) and national health organizations, saying that it is important that the mother spend more time with the newborn.

Legislator José María Villalta, of the Frente Amplio party, and promoter of the bill walked with the mothers carrying his son. Villalta said that the bill should be ready to presented to the Legislature in a couple of weeks.

“We have to find a creative funding source so as not to place the total burden on the Caja and employers.