Monday’s Protest By ICE Workers Expected To Be Peaceful 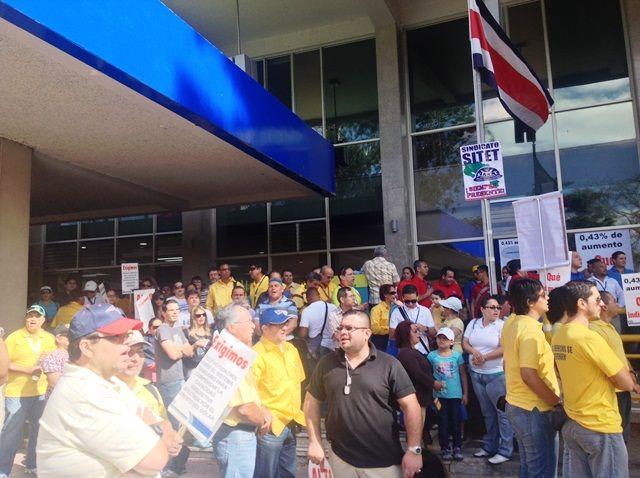 (qCOSTARICA) More than 80 traffic officials have been assigned to the task controlling traffic condition in downtown San Jose today, as workers of the Instituto Costarricense de Electricidad (ICE) take to streets today, in defence of public employment.

Although the ICE workers union, the Asociación Sindical de Empleados Industriales de las Comunicaciones y la Energía (Asdeice), calls it a general day of protest, in fact it can be said the protest is against the publications of late of the “gross” salaries some ICE and other government employees are paid.

Some 10,000 protestors will gather in front of the ICE headquarters in La Sabana, move through Paseo Colon and Avenida Segunda, to reach the Legislative Assembly on the other east side of downtown San Jose.

Mario Calderon, director of the Policia de Transito (traffic police) explained that the officers will be on the job starting at 6:00am Monday, closing streets and providing traffic controls, including ensuring emergency vehicles can reach the San Juan de Dios and Hospital de Niños (Children’s Hospital) on Paseo Colon.

The comment was related to a recent protest by porteadores (informal taxis), impeding emergency vehicles responding to a traffic accident west of the San Jose airport, where two people died. Emergency crews say a quicker response could have changed the outcome.

For his part, President Luis Guillermo Solis, expressed his hope for a peaceful demonstration. “I am sure it will be peaceful, the union leaders have assured it,” said the President.

This is a developing story. During the day we will be updating in the event of anything major.