MOPT At War With Itself

The hierarchy of the Ministry of Public Works (MOPT) may be in a state of denial, but is contradicting its own technicians. A heavy rainstorm Monday caused a shutting down of work on the Circunvalacion because MOPT technical staff felt that the sides of the repair had been weakened. 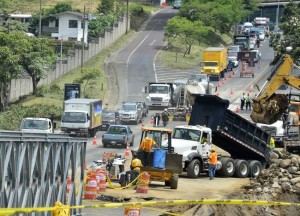 David Melendez, director of emergencies for MOPT told the national newspaper La Nacion Tuesday that he recommended shoring up the sides of the deep trench previous rainstorms had carved in the highway when a culvert collapsed.

The repairs have been delayed for the sides of the hole in the road to be shored up by landfill after the approaches to the temporary Bailey bridges had been undermined. Three of the four bridges that had been installed with haste to allow traffic to pass over the damage, had to be just as hastily taken down.

It was not long before the public relations department at MOPT kicked into gear with a press release stating “the work does not present any risk of weakness provoked by the rains of recent hours.” The highway agency, Conavi, director Cristian Vargas insisted that beams put into the ground to hold up the sides of the repair were sound.

Tuesday, Vargas said that the problem was not that the remaining temporary bridge “was compromised but that some reinforcing beams had fallen” and the bridge had to be elongated on the approaches. He said the pavement that had been installed on those approaches had been removed to lighten it.

But that wasn’t the only disagreement between MOPT and technical experts. Minister of Public Works Pedro Castro begged lawmakers to send to the Constitutional Court (Sala IV) a measure approved in committee the week before demanding that he listen to a technical agency.

The unusual bill would require MOPT to follow the findings of the technical laboratory on structure and materials (LANAMME). This would apply to decisions about infrastructure construction and repair. Castro said his doubts stemmed from the fact that LANAMME is a department of the University of Costa Rica.

Comment: Castro’s objection may stem more from the fact that he wants to make decisions on the basis of political advantage, not technical expertise. For example, his agency is busily constructing a culvert to cure the damage to the Circunvalacion when the lab recommends a bridge.

But Castro wants the faster, cheaper solution, even through it will last a fraction of the time a bridge can endure Costa Rica’s rainy climate. That’s partly what’s wrong with the infrastructure of this country in the first place.

QCOSTARICA - For Wednesday, November 25, 2020, the Ministry of Health reported 1,330 new cases of covid-19 in Costa Rica, raising the accumulated of...
Photos of Costa Rica

QPHOTOS - Playas del Coco is one of the oldest beach communities in Guanacaste Province, Costa Rica. This region is also one of the...
Pura Vida

The bicycle, fashion in Costa Rica in times of covid-19

QCOSTARICA - The bike (bici in Spanish), in fact, along with masks, face shields, alcohol gel and hand washing liquid soap, is one of...
Redaqted

QTRAVEL - Canada's Prime Minister, Justin Trudeau, on Friday warned so-called Canadian "snowbirds," many of whom travel to the US and Mexico during Canadian...
Nicaragua

19 dead and 45 injured in traffic accident in Waslala, Matagalpa

TODAY NICARAGUA – The overturning of a truck left 16 people dead and 45 injured in the community of Ocote Tuma, in the municipality...