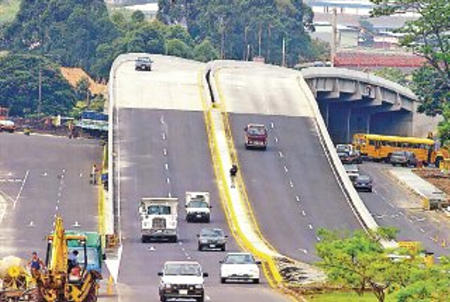 QCOSTARICA - The effects of the fifth wave caused...
Read more

QCOSTARICA - The week will start differently for students...
Read more

QCOSTARICA -Any business establishment, whether it is a restaurant,...
Read more

Achieving some progress on the delayed 5km Circunvalacion Norte (ring road) project is also said to be a MOPT priority.

A tender for the design of the toll-less flyover is due to be launched in January 2013, with construction earmarked to start in 2014. It is expected to be completed after 18 months.

Expropriations are not required for the flyover, but will be for Circunvalacion Norte. Some assessment also needs to be carried out to define the route between route 32 and Calle Blancos, with the possibility of building a tunnel to avoid expropriations.

The Circunvalacion when complete will move traffic around the downtown core. Missing link is between La Uruca (Burger King) and Calle Blancos, 100m north of Walmart.

Costs for the flyover and Circunvalacion Norte have been estimated at between US$150 million and $200 million. Finance for the schemes will come from the Central American Bank for Economic Integration (CABEI).

The Biggest Names in the Latin American iGaming Market