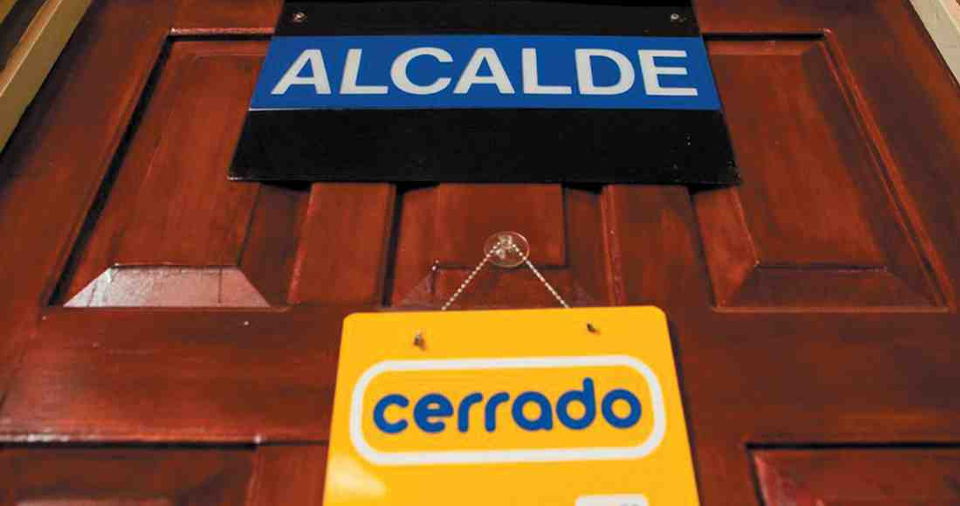 QCOSTARICA – By Henry Morales Navarro, Vozdeguanacaste. On Monday, November 24, agents from the Judicial Investigation Organization (OIJ- Organismo de Investigacion Judicial) raided the Municipality of Nicoya’s land registry department and the offices of the mayor, Marco Jimenez, as part of an investigation process that was opened in the Nicoya District Attorney’s Office against the Nicoyan leader.

According to the Nicoya District Attorney’s Office, the legal complaint was presented on September 18, 2014 by one of the municipal council members, whose name was not released, and is filed under case number 14-001109-414-PE, for the crimes of usurping authority and illegal exercise of the profession.

“The investigation underway is against a man with the last names Jimenez Muñoz, who is mayor of the municipality, and who apparently granted endorsement of an undetermined number of property plans in 2011, without having the authority to do so,” says the report from the District Attorney Office.

In the raid they were able to confiscate important information; however, it was not possible to locate the endorsement stamp or the copy of the plans related to the cases under investigation.

For his part, Mayor Marco Jimenez completely denied that he has endorsed any plan.

“I have not endorsed any plan. The only thing I’ve done is authorize people to go to the National Registry to register plans, for them to later be endorsed in the municipality,” said Jimenez.

The mayor acknowledged that although he personally has not endorsed any plan, article 34 of the Urban Planning Law does empower him to do so.

According to that article, municipal endorsement of plans or schematics, which do not need to have been registered, should be given by the engineer or municipal executives or the person to whom they delegate such functions within 15 days of their submission and should be done for free.

To better understand the picture, The Voice of Guanacaste consulted Nicoyan lawyer Oliver Moreno, who explained that although the mayor has authority to endorse plans, it is not ethically correct because that power was given when the organization of the functions of municipal executives was different.

“This article refers to the old municipal executive figure; however, that figure as such has disappeared, does not exist. Instead the mayor has general power, so from a legal point of view he is empowered, although it is unethical for him to do so. What is correct is that now for each function, there exists a department in charge,” said Moreno.

According to the press department of the Public Ministry, other pronouncements exist— even from the Comptroller General of the Republic— that could be used by the District Attorney’s to determine whether or not crimes exist in this specific case. For now, the case is in the preparatory stage of investigation, in which evidence is gathered and analyzed, and afterward the District Attorney’s Office will determine if they press charges, reject or dismiss the case.

Scare in the Muni

Eight days before the raid took place, the mayor’s office was the target of a robbery in which the human resources, environmental and women’s offices were broken into, from which they stole computers, GPS equipment and other property. They also left evidence of having had an interest in taking some kind of documents.

Those responsible for these acts have not yet been found. However, OIJ is investigating what happened.

For his part, Oliver Perez, press spokesperson for the municipality, said that no internal institutional investigation has been initiated and that the rumors that some municipal employees received threats are false.

Epidemiologists assure that we’ve reached the peak, but descent will be very slow

QCOSTARICA - At the end of June, the Pan American Health...
Read more

Hacienda and INS run to apply reduction in 2021 Marchamo

QCOSTARICA - The Ministerio de Hacienda (Treasury) is in the process...
Read more

QCOSTARICA - Three European airlines announced Friday they are ready to resume flights to Costa Rica, the first will be Air France, arriving at...
Read more
Money

QCOSTARICA - The change in the exchange rate of the dollar against the colon is an aspect that causes many concerns and nervousness, not...
Nicaragua

TODAY NICARAGUA – The 70 votes of the ruling Frente Sandinista (Sandinista Front) in the National Assembly approved, without opposition, the Special Law on...
News

QCOSTARICA - Congress approved this Thursday afternoon, in second and final vote, the reduction in the 2021 Marchamo that will go into effect on...
Politics

QCOSTARICA - With the objective of avoiding massive layoffs and more labor lawsuits, private sector workers who are working only part-time today due to...