I read every article I could get my hands on regarding the new tax required to leave Costa Rica at the Nicaragua pedestrian border. According to news sources, I could pay the fee at any Bancrédito branch, myth. The fee was reported at $5, myth (it’s $7). I researched and found only two branches in all of Guanacaste. One at the Liberia Airport and one at Plaza Santa Rosa just behind the McDonalds (Highway 1 and Central Calle). 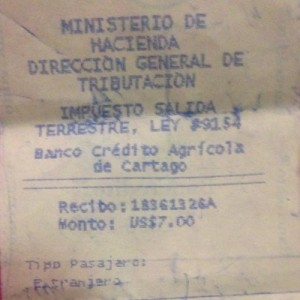 My plan was to arrive close to 6am, when the border opens in order to avoid long lines associated with Christmas. More Nicaraguans return home from Costa Rica the last two weeks of December than any other time of year. An article informed me that I could pay the tax at Bancrédito’s ATM, which would allow me to work around their business hours, myth. I had a back up plan in case the ATM was broken or the information was wrong, I would drive an extra 20 minutes each-way to the airport in Liberia where the Bancredíto’s branch opened at 6am.

That didn’t work either. While they were in fact open, they could only accept the tax for airport departures, $29. I asked if I could pay the extra $22 a person and bring the more expensive receipt to the border, and they said that wouldn’t work. They informed me that the only way to leave Costa Rica at the Nicaraguan border from Guanacaste was to drive back to Liberia and wait until 9am when the only branch in the province capable of accepting $7 to leave Costa Rica would open.

Crossing into Nicaragua from Costa Rica at the border

My wife and I woke up at 3:45am on December 16th, 2013 and were out our door in Nuevo Arenal by 4:20am in order to beat the lines. Happily on schedule, we arrived in Liberia just before 6am. The bank in Liberia was closed, as expected, but so was the ATM. It was out of service. Apparently, the bank personnel run the ATM the same hours that the bank maintains. So we moved to plan B and were off to the airport. While it was nice to not worry about checking bags and long lines, it was less that wonderful to find out that they also couldn’t send us on our way with our tax receipt. Our only remaining option was to loiter in Plaza Santa Rosa until 9am. About 50 games of gin later the bank opened and we were able to pay our taxes and knocked out our Marchamo while we were there!

This was our first crossing into Nicaragua. My wife and I paid too much to the “helpers.”  They help guide you through immigration process. After much negotiation we were supposed to pay a total of $30 per person for our immigration fees and a tip for our helper. Money spent at the border looked like this:

To learn more about how to move, live, work, and retire in Costa Rica, read Becoming an Expat: Costa Rica by Shannon Enete.