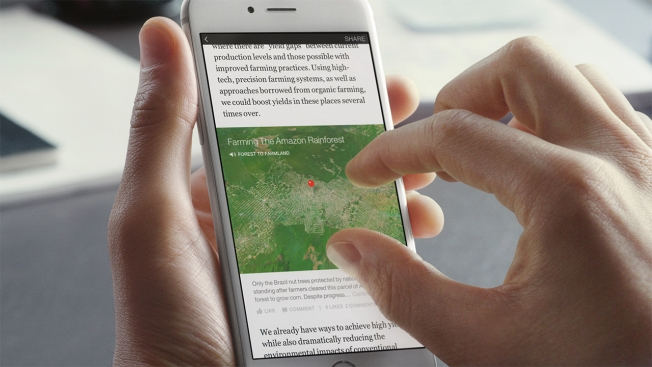 (QCOSTARICA TECH) Mobile Facebook users may soon spend less time navigating directly to a publisher’s website to check out an interesting article. Instead, they’ll find some of that content posted directly to the News Feed, thanks to Facebook’s new venture: Instant Articles.

According to Facebook’s blog post about the new tool, the social network’s launch partners with access to Instant Articles will be:

NY Magazine broke the news last month, but details of the project have largely been kept under wraps until Facebook’s official post outlined the features and participants. As of this morning, none of the publishers listed in the blog post appears to be using the feature yet.

The primary goal of Instant Articles, according to Facebook, is to enhance a reader’s mobile experience with Facebook by cutting down on loading time and adding more interactive features—like animtaed maps and photo zooming.

“We designed Instant Articles to give publishers control over their stories, brand experience and monetization opportunities,” Facebook product manager Michael Reckhow wrote in a blog post.

Facebook’s move to shift publisher content directly into its own platform is the most dramatic step in a clear trend by networks that want to keep users on their sites.

LinkedIn, for example, often grants far greater visibility for those who publish within its Pulse platform rather than linking off to the writer’s own news articles or blog posts.

In a more direct comparison to Facebook’s new feature, Snapchat’s Discover program similarly allows a select group of publisher partners (including CNN, Vice and National Geographic) to push out interactive articles via the popular mobile app. Other publishers who use Snapchat are held to the app’s usual content limitations, namely creating real-time photo or video posts just as a user would.

It’s unlikely that Facebook’s launch partners will move all their stories to Instant Articles. The New York Times notes that it is primarily experimenting with new ways to grow its reach and audience.

“We’re participating in Instant Articles to explore ways of growing the number of Times users on Facebook,” Times president and CEO Mark Thompson said in a press release, “improving their experience of our journalism and deepening their engagement.”