Rowdiness that escalates to violence is now a “no no” now at sporting events across Costa Rica, as the new law to curb violence and racism went into effect on Friday. 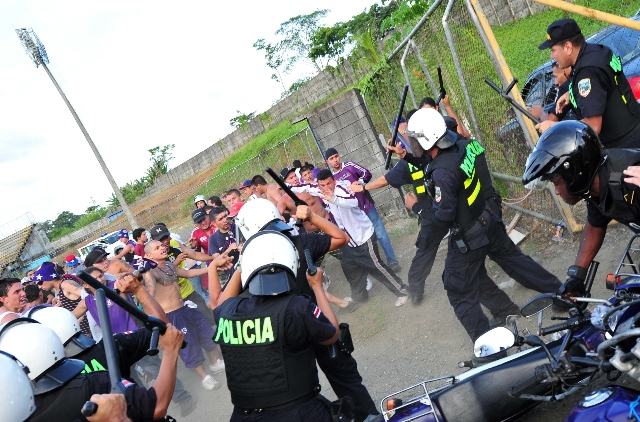 The “Ley para Prevención y Sanción de la Violencia en Eventos Deportivos” (Law on Prevention and Punishment of Violence at Sporting Events) was passed in the Legislative Assembly in June, but it did not come into effect until its publication in La Gaceta Friday (August 23, 2012).

The objective of the law is to establish strong regulations of those causing violence at sporting events.

Legislator Damaris Quintana, of the Movimiento Libertatio (ML), said on the approval of the law, “the aim is to enable families to return to mass events and without the fear of violence”.

The new law also sanctions with a ban of up to a year spectators carrying weapons and/or drugs into sporting events, entering the playing field or the locker rooms without authorization and hurling objects from the stands.

Sanctioned will also be those who damage vehicles and/or private property within five kilometres of a stadium and anyone blocking the “normal flow” of traffic from three hours before and three hours after a sporting event.

The most severe of sanctions is a four-year ban from attending events, reserved for fans involved in fighting, inciting violence and committing acts of racism.

Enforcing the law is the responsibility of the Ministerio de Seguridad Pública through the system called Seguridad en Eventos Deportivos (SISED) that will collect information and coordinate and support the work of prevention and punishment.

QCOSTARICA - Do you need a certificate of the COVID-19 vaccines applied in Costa Rica?  People who require a certificate that certifies the receipt...
Expat Focus

Today, Sunday, June 6, only ODDS can circulate. The measure is countrywide and applied between 5:00 am and 9:00 pm, save for those under...