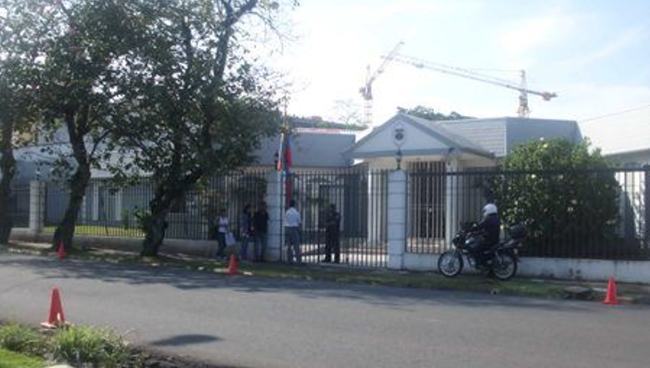 The motive is yet unclear, but what police do know is that a total of 15 bullets impacted the Colombian Embassy building, located in barrio Dent de Montes de Oca, San Pedro (San José), Friday morning.

According to Embassy officials, a gray coloured vehicle sped past the Embassy located in a residential neighbourhood at 2:40am Friday and fired a burst of bullets against the building.

“It’s a national security issue and being a diplomatic post, the protection and security is the responsibility of the Poder Ejecutivo”, said the deputy minister of Seguridad, Celso Gamboa.

Costa Rica officials are not providing much on the type of weapon that was used or the possible motive for the attack.

With caution in his voice, the Ministro de Seguridad, Mario Zamora, said the first impression is that the bullets could come from a large calibre weapon like an AK-47.

Gustavo Mata, deputy director of the Organismo de Investigación Judicial (OIJ) would only say, “I cannot talk about calibres, only that 15 bullet holes were found. For now that’s all we have”.

Colombia’s Ambassador to Costa Rica, Hernando Herrera, explained that his office is coordinating efforts with Costa Rican police, and that he has maintained constant communication with them and that of Colombia’s security forces, as is usual in such cases.

“I am in contact daily with Colombian intelligene and the cases being investigated by the DIS”, said Gamboa.

Despite road blocks following up on the only lead – the grey car – police have come up empty.