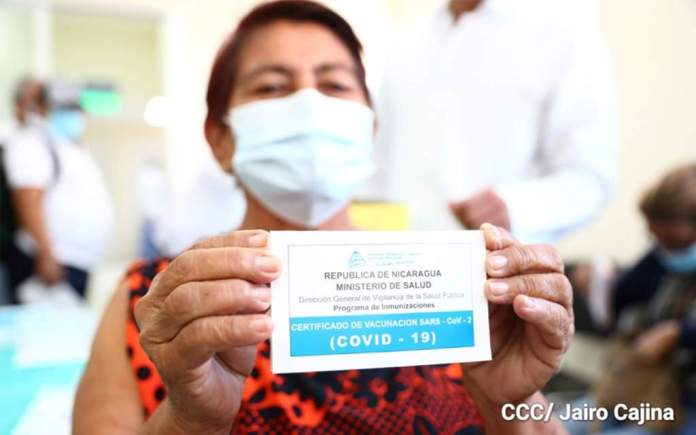 TODAY NICARAGUA – Nicaragua, on Tuesday, March 2,  began to apply the Russian Sputnik V vaccine against covid-19 to people with chronic diseases, in the first phase of immunization that will later be extended to other segments.

“At this stage, we are vaccinating all patients with kidney problems” who are treated in public, private and social security hospitals, Nicaragua’s health minister, Martha Reyes, announced to official media, El19Digital.com.

The second booster dose of the Russian vaccine will be given 21 days after it is given, she explained.

Chronic kidney disease is a growing health problem in Nicaragua, like the rest of the Central American countries, according to the Pan American Health Organization (PAHO).

With this vaccine, “we are being given the opportunity to continue living because covid-19 is extremely dangerous,” said Marco Arauz, 62, the first Nicaraguan to receive the vaccine at the Hospital Cruz Azul in Managua, a hemodialysis center.

Only the state press had access to the inauguration of the vaccination day, which the government affirms will be “voluntary.”

The Ministry of Health (MINSA) plans to conclude the immunization of patients with kidney problems on March 22, and then vaccinate patients with diabetes, heart disease, cancer and other chronic ailments.

Nicaragua is one of 26 countries, so far, to acquire (in Nicaragua’s case donated) the Spuknik V vaccine, according to the Russian Direct Investment Fund (RDIF).

The first batch arrived last week, the government said without specifying how many doses were received.

In January, the Ortega Government announced that they would purchase some 3.8 million doses of the Sputnik V.

Nicaragua, with 6.5 million inhabitants, also expects to receive in the next few days 200,000 doses of the Covishield vaccine from India and the first 135,000 doses from AstraZeneca, through the COVAX mechanism, created to guarantee an equitable distribution by the World Health Organization (WHO).

According to official data, the country has accumulated 6,489 cases of covid-19 and 174 deaths since March 2020, while the Observatorio Ciudadano (OC), a group created by independent doctors, says the number of cases is more likely to be 13,140 and 2,976 deaths.

Nicaragua is the only country in Central America that did not adopt restrictive measures against the coronavirus, and that does not carry out massive tests to measure the progress of the pandemic.

The Ministry of Health said that the vaccines will only be applied to a population over 18 years of age.

Health Minister Reyes explained, “The vaccine is also not applied to pregnant women, nursing mothers or to people who at the moment may have a fever, an acute infectious disease or a chronic disease in which they are decompensated, there we would have to wait for them to improve from their infectious picture”.

“The vaccine is managed by the Ministry of Health in the vaccine banks that have the necessary conditions for the maintenance of the vaccine. It is transferred to the health units in special refrigerated trucks and here it is kept in a special thermos, from where the vaccine is taken to proceed with the vaccination. Each vial in this presentation has 5 doses,” explained Roberto López, executive president of the Nicaraguan Social Security Institute (INSS).

Sputnik V vaccine goes through a 25-minute waiting process to thaw before being given. “Once removed from the cold box that maintains a temperature of minus 20 degrees, wait about 25 minutes for it to be liquid, an amber color and that establishes that it can be applied,” said the Minister of Health.

Carlos Sáenz, secretary-general of the Minsa, announced the vaccination schedule against Covid-19.

On Thursday, March 4, patients from the Cruz Azul hospital and the Flor de Sacuanjoche Medical Previsional Clinic in Chinandega will be vaccinated.

On Friday, March 5, it will be activated in the Lenin Fonseca, Military and Comprehensive Health hospitals.

On Saturday, March 6, at the Lenin Fonseca, Militar and Monte España hospitals.

QCOSTARICA - If the rhythm in the arrival of doses against...
Read more

QCOSTARICA - Among the many anguishes that the pandemic...