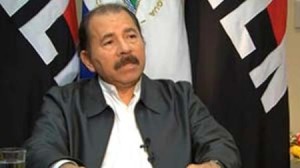 President of Nicaragua, Daniel Ortega, reaffirmed today the conviction that Russian firms will take part actively in the construction of an interoceanic canal linking the Pacific and the Atlantic oceans through his country. “We are certain that firms from Russia will be involved in the great work of the canal through Nicaragua,” he said in a TV broadcast interview released here.

Ortega told Russia Today TV channel that firms from the People’s Republic of China and other nations, grouped in a firm created in Hong Kong that is already operating, are involved in the project.

He said that with the return to power of the Sandinista National Liberation Front, Nicaragua established from 2007 a longstanding relation with the Russian Federation, which has undoubtedly mean a great relief for Nicaragua because this is a cooperation that values the Nicaraguan people in all fields.

QCOSTARICA - Borrowing its way out of the current financial crisis seems to be objective for the Carlos Alvarado government. Obtaining about US$2.5 billion this...
Immigration

QCOSTARICA - Before I get into my opinion of the irresponsible actions of the immigration service and the ICT, good news for tourists who...
National

QCOSTARICA - For their preparedness to face tsunamis, the communities of Tamarindo and Sámara were recognized by the Junta Nacional Tsunami Ready de Costa...
Politics

QCOSTARICA - The quijongo is now in very good health thanks to the care of the people of Guanacaste, who are dedicated to protecting...
Fashion & Beauty

Q MAGAZINE - Miss Costa Rica 2020, Ivonne Cerdas, will soon be traveling to Florida to represent the country in the Miss Universe pageant. After...
Health

QCOSTARICA - A total of 24 travelers, so far, face problems with the law when discovered trying to leave Costa Rica, through the San...
El Salvador