On foot and on horseback, campesinos road through the Caribbean jungle town carrying blue-and-white Nicaraguan flags following a truck with blaring speakers that vowed to defend ancestral land from government expropriation.

“What do the campesinos want?” ”For the Chinese to leave!” echoed the call-and-response. “What do the farmers want?” “For the invaders to leave!” 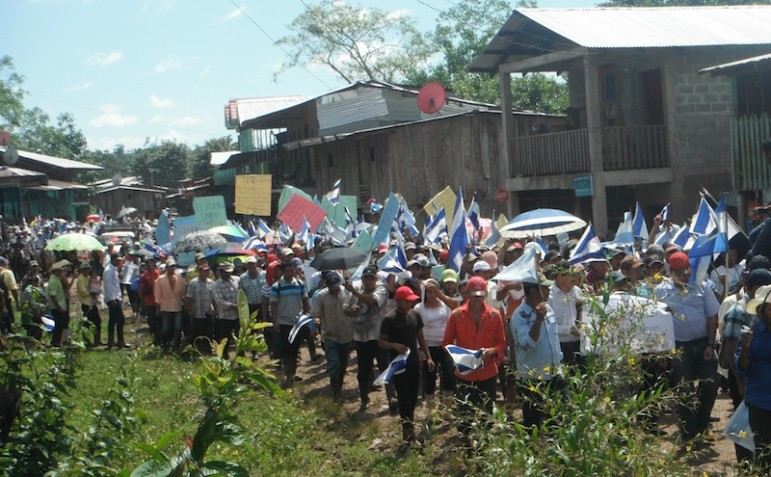 During the march the campesinos yelled: No to the canal! Chinaman go home! Sellouts out! Here is el pueblo presidente! We will not sell our land!

Protesters marched through the intermittent rain holding homemade signs that accused President Ortega of being a “dictator”  a “sellout” and a “traitor.”

At the end of the march, protesters delivered fiery speeches against the canal and urging campesinos to not sell their land to the Chinese for 1,000 cordobas ($38 per manzana). Protest leaders urged campesinos to make photocopies of their land titles and save them in a safe place. Those who don’t have land titles still have rights, march leaders shouted into megaphones.

Monday’s march in Nueva Guinea was the second one in the Caribbean municipality in two weeks, and the second march against the canal in three days following last weekend’s protest on Ometepe Island, where an estimated 5,000 people demonstrated against the proposed megaproject.