Nicaraguans feel ‘safer’ in migrant caravan than back at home 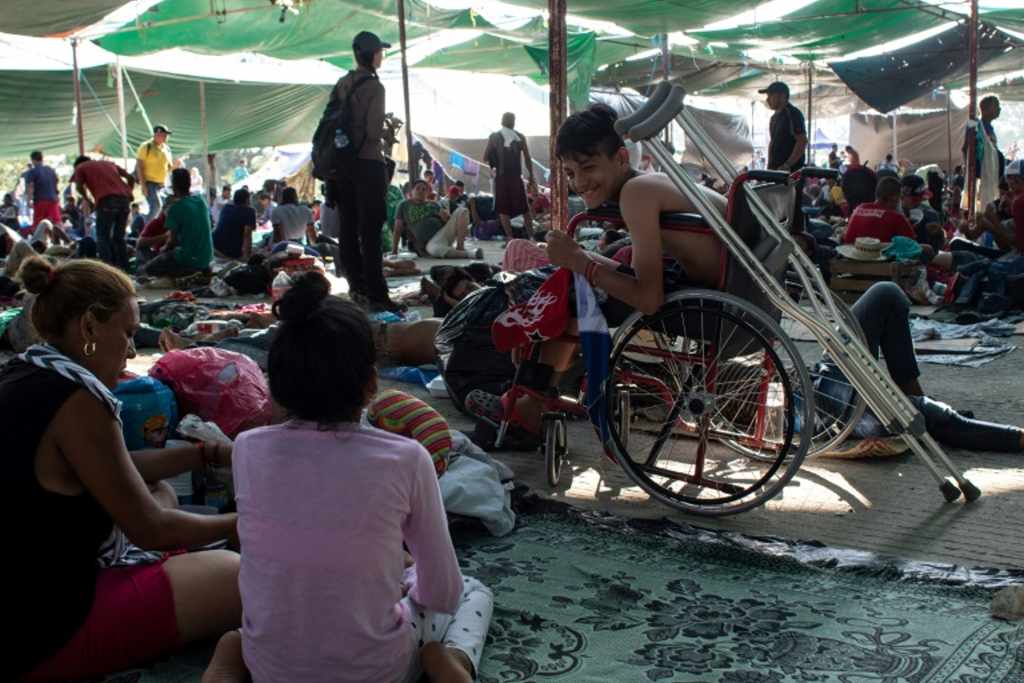 TAPANATEPE, Mexico (AFP) – With the national flag of Nicaragua draped over his wheelchair, 14-year-old Axel Sebastian Palacios cuts a distinctive figure among the thousands of mostly Honduran migrants traveling in caravan across Mexico.

Palacios and his parents say they decided to join the caravan because they feel safer on the treacherous migrant journey than back home in Nicaragua — suffering under the leadership of Daniel Ortega, aided by his brutal paramilitary supporters.

Yet despite being thousands of kilometers (miles) away from their tumultuous homeland, traipsing through Mexico toward the border with the United States, Palacios and his family still live in fear of being hunted down by those paramilitaries.

“I feel safe in the caravan, but also afraid,” said Palacios in a faint voice.

Already, the teen says he owes his life to his best friend, who threw him to the ground when pro-Ortega paramilitaries attacked his hometown of Diriamba in July.

He recounts that residents were barricaded behind makeshift cobblestone defenses, armed only with slingshots, when the Sandinista fighters arrived and opened fire, just as they had done in other nearby opposition strongholds.

He survived, but was later injured when trying to help a friend who was fatally wounded by a bullet in the chest.

Now Palacios now has a splinter in his shin that hampers his ability to walk more than a block at a time.

After the paramilitary attack, Palacios and his father fled to the mountains and the whole family left the country a little over a month ago.

But as time passed without a response from Mexican authorities, Palacios’s family opted a week ago to tag along with the largely Honduran caravan.

“I think it’s about us doing something, we’re all going to defend each other,” said Palacios of the decision to join the migrant wave.

Shortly after crossing into Mexico, Palacios’s mother Idania Molina says she received a text message from the Sandinistas, telling her they would find and kill her family.

Her son wakes up with a start every night, and has done so since July.

“I feel happy because we’ve left that place but also insecure,” said Palacios, as he watched his 12-year-old sister sleeping on the floor.

“They (the Sandinistas) sent us a threat and told us it would be easy for them to cross the border into Mexico.”

Palacios covered the first 200-kilometers (125 miles) on Mexican soil using crutches, until local authorities in the town of Tonala, in Chiapas state, saw the sores under his armpits and donated a red wheelchair.

Molina estimates there are around 30 Nicaraguans in the caravan, which the United Nations says is made up of 7,000 people, although organizers put that figure at 4,000.

Although the caravan’s original intention was to head for the US, after a vote it changed course and went to Mexico City so individuals could ask for migration documents that would allow them to move freely around the country.

When unable to hitch a lift on passing trucks, Palacios’s family take turns to push his wheelchair.

All he can do to help is hold on his emaciated legs the family’s biggest bundle of belongings, a blue plastic bag containing clothes, medicine and medical reports relating to his leg, as well as evidence to support an eventual asylum application in the United States or Mexico.

Having fled Nicaragua, the family’s Mexican journey is fraught with new dangers.

“The truth is, we came with the dream of crossing to there (the US), but we’ve heard lots of stories and I’m afraid they’ll kill us,” said Molina, 39, referring to Mexican gangs.

According to the Mexican authorities, in 2010, a group of 72 undocumented Central and South Americans were kidnapped and murdered by the Los Zetas drug cartel for refusing to work for them.

“We want Mexican asylum, but in Mexico City and before too long because I need care for my son,” said Molina, before breaking down in tears.

She dreams of meeting Mexico’s first lady, Angelica Rivera Hurtado, who she believes will “listen.”

Over the border meanwhile, US President Donald Trump has deployed troops to prevent the migrants from entering the country, while warning Central American countries they will lose aid if they don’t stop the caravan.

“We can’t go back to Nicaragua, because we’re persecuted,” said her husband Lesther Javier Velazquez, who voices hope that “God will touch the heart” of the US president.

- Advertisement -
Paying the bills
Previous article“It was premeditated” OIJ Director On Suspects Attempt To Kidnap Boy In Santa Ana
Next articleHow Much Do You Know About the Day of the Dead?