No More Return to Sender?

In Costa Rica, a quarter of all mail never reaches its destination

In many parts of Latin America, these are not just the directions you might be given by a friendly local, but an actual postal address. For example, “from the Fogoncito restaurant (or Plaza Mayor if you don’t know where the Fogoncito), one block west, to the right”, is the address for the new offices of Convergys, in Pavas.

Costa Rica, Panama, and Nicaragua are among the countries that use landmarks, such as schools, parks, or even fast food restaurants, to locate houses and businesses in bizarre address systems that make mailmen “more like detectives,” said one regional newspaper last month.

A reader asks, why don’t Ticos give you the full address? For example, another typical direction for the Convergys office would be, “from the national stadium, go past the Oscar Arias house, call me when you get to Plaza Mayor”. At the Q we don’t have the answer, if you do, use the comment section below.

Inefficient post can seriously impact a country’s economy, according to the Universal Postal Union (UPU), so countries across the hemisphere are making efforts to modernize.

Ecuador and Colombia last month became the latest Latin American countries to introduce a postal code system. Their aim was to reduce the millions of mail items lost every year and give their nations “an identity at the global level,” says Ecuador’s National Postal Agency’s (ANP) director Maria de los Angeles Morales, who has overseen the $1.2 million project. 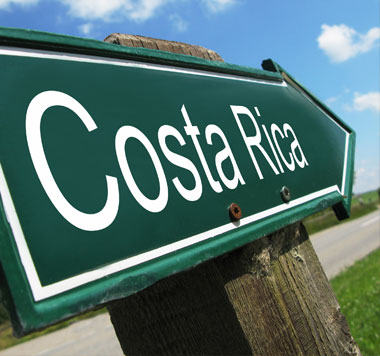 Around 1.7 million mail items were lost in Ecuador last year, despite the use of street names and house numbers, and Ms. Morales estimates $75 million worth of gasoline was wasted on failed deliveries.

In Costa Rica meanwhile, a quarter of all mail never reaches its destination. A 2008 study estimated that the lack of systematic addresses and signage costs the country US$720 million annually.

An envelope once arrived to the capital city of San Jose’s central post office headquarters addressed: “To the man who is sometimes outside the post office.” That letter did apparently reach its intended recipient.

“People know all about the magical realism of Gabriel García Márquez but they don’t realize that in many ways Latin Americans are actually living it,” says Pablo Villalva, communications head at Ecuador’s ANP. “We want to change that, make our public services modern and efficient, in line with the rest of the world.”

ANP’s staff are very proud of their postal system overhaul, seeing it as an illustration of Ecuador’s transformative progress under President Rafael Correa’s “Citizen’s Revolution,” both domestically and on the global stage.

“We want to get rid of this image of a ‘banana republic,'” says Mr. Villalva. “Germany has had post codes since 1941 – why are we so far behind? This is going to be very important for the strategic sector of the Ecuadorean economy.”

Ecuador has been divided into 1,140 postal zones, each containing around 6,000 homes and 30,000 inhabitants. The many private mail companies operating in the country have been involved in the process, and a major publicity campaign has been launched.

Efforts to name streets and introduce postal codes in Costa Rica have so far failed to really catch on, and getting Ecuadoreans to use the new system is now ANP’s greatest challenge, says Morales.

Making post efficient in a country with no such tradition will require a “change in culture,” she said – right down to teaching people “that mailboxes are for putting post in, not trash.”

QCOSTARICA - Today, Monday, June 21, is the day of the year when the sun stays the longest on the horizon, therefore it is...
Health

QCOSTARICA - No more soup for you! If the Minister of Public Works and Transport (MOPT), Rodolfo Méndez, has his way, the H. Solís...
Redaqted