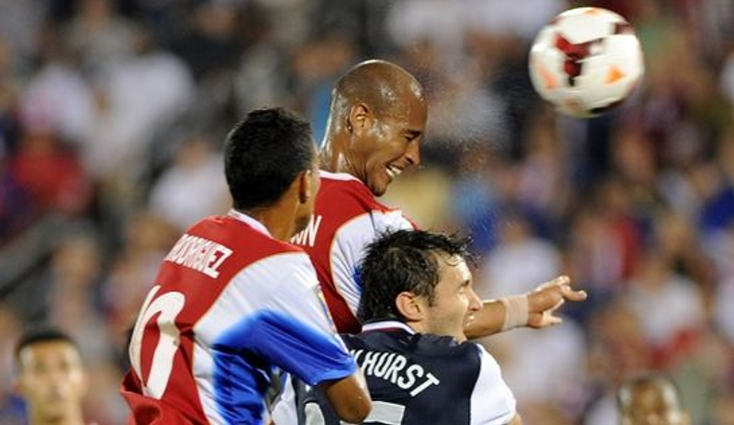 The United States topped Group C thanks to a 1-0 win over Costa Rica on Tuesday night, but it wasn’t easy. Using a five-man defense, the Ticos frustrated the Americans all night and turned the match into more of a continued scrum than soccer, but an 82nd minute strike by Brek Shea got the U.S. all three points.

Very little in the first half could be described as “soccer.” Costa Rica forced the U.S. to play long balls over the top, which they cleared without a problem and with the referee letting both teams play, the physicality ticked up the midfield,. That didn’t lend itself to beautiful soccer and the first 45 minutes passed without many chances on either side.

Things opened up a bit in the second half, but not by much. The Ticos stretched themselves a little more and tried to muster some sort of attack as they went in search of the win that would send them to the top of Group C, which opened some space behind them. But just like the Costa Rica struggled to generate chances even when they showed more ambition, the U.S. failed to take advantage of the space afforded to them.

Finally, the U.S. did find space in behind the Costa Rica defense and when Patrick Pemberton collided with his own defender, they had a chance. The ball fell to Chris Wondolowski, who had a shot from 25 yards and while Pemberton saved it, he was outside of the box. The referee blew his whistle and despite the Americans’ appeals for a red card, the Ticos had a defender in the box that the referee must have ruled could have saved Wondolowski’s shot. That would make it no longer a clear goalscoring opportunity and instead just a yellow card, which Pemberton was shown.

It took a set piece for Costa Rica to finally get a chance at goal, and it looked like it would win them the match. Alvaro Saborio got free at the far post on a corner and headed towards the top corner for a sure goal, only Sean Johnson made an amazing diving save to deny him.

The save spurred a U.S. counterattack, with Joe Corona hitting a ball to free Landon Donovan down the right. Donovan got to the ball at a full sprint and with his first touch he sent the ball back to the middle. The ball found Shea right in stride and all alone against the goalkeeper, Shea took one touch to settle before firing home to win it for the U.S.

The Americans took a perfect nine points from their three matches to top the group, which earns them a quarterfinal match-up against El Salvador on Sunday. Costa Rica finished the group in second place with six points, which matches them up against Group B winners Honduras.

Acne is considered to be one of the most common skin ailments on the planet, with a record 60 million people being afflicted by...
Banking