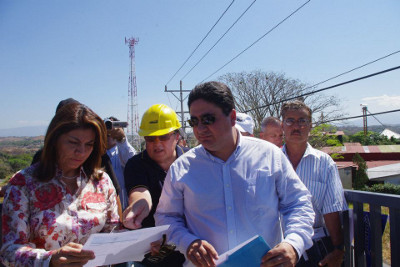 Here is a task for you, who to believe, Presidenta Laura Chinchilla? or the Brazilian contractor, OAS? One says there is an agreement, the other no for OAS to get US$45.9 million dollars to walk away from the San José – San Ramón road project.

At the of April, Presidenta Laura Chinchilla bowed to public pressure to cancel the controversial road constructions project announced by her government weeks earlier.

In a television address to Costa Ricans, the Presidenta said the cancellation of the contract would not cost Costa Rica anything (Presidenta Promises The Breaking Of the Concession Contract Will Not Cost The Country “One Colon) .

Chinchilla did allow that the company should be compensate to the tune of US$30 million dollar for out of pocket expenses.

A letter of cancellation was set to OAS. At the time the public was lead to believe that was the end of the deal. However, the company actually had 30 days to respond. And respond it it.

The kicker here is that OAS says the Chinchilla government had agreed to pay the US$45.9 million to terminate the contract, a deal the OAS says was reached verbally.

The ministro de Planificación and vicepresidente de la Junta Directiva del Consejo Nacional de Concesiones, Roberto Gallardo, assures that the government will be asking OAS all documentation, technical and financial to support the amount requested, before passing judgement and determining whether to pay it.

The request by OAS was made in writing to Casa Presidencal on Thursday, detailing its expenses incurred in the process.