Q COSTA RICA – Following a year long investigation into a drug trafficking organization that shipped cocaine from Costa Rica to Spain, England and the United States, the Organismo de Investigación Judicial (OIJ) learned that one of their own was advising the narcos.

The official, identified by his last names Aleman Rodriguez, 31 years of age, and a 10 year veteran of the OIJ, was arrested Friday morning in the OIJ Perez Zeledon office.

“His role was to advise, provide information and take advantage of his police experience to transmit his knowledge to the criminal organization,” said Walter Espinoza, director of the OIJ.

According to Costa Rica’s Attorney General, Jorge Chavarria, it is normal for criminal groups to seek to penetrate judicial institutions, but what is important is that they are discovered.

“This reinforces our concern to be attentive to the behaviour of officials. There is a cross control that allows us to detect these types of situations in a timely manner. We have a zero tolerance on this,” said Chavarria.

The AG added that the official will not be charged with corruption, rather for international drug trafficking, a crime with a prison sentence of up to 20 years.

During the investigation, it was learned that Aleman was meeting with members of the narco group, however, it was not possible to determine if and how much he was being paid.

“He (Aleman) did not give the appearance of having altered his life with an increase in income, but we will be investigating to determine if he use front men,” said Chavarria.

The raid on the luxury home in La Garita de Alajuela

Friday morning, the OIJ conducted a series of raid in 11 other parts of the country, resulting in taking down the narco group and the arrest of 10 of its members. The Friday morning raids took place in different parts of San José province that included: La Uruca, Santa Ana, San Cayetano, Calle Blancos and Pérez Zeledón; In Puntarenas province : Chacarita, Corredores, Jacó and Quepos, en Puntarenas: and a luxury home in La Garita de Alajuela. 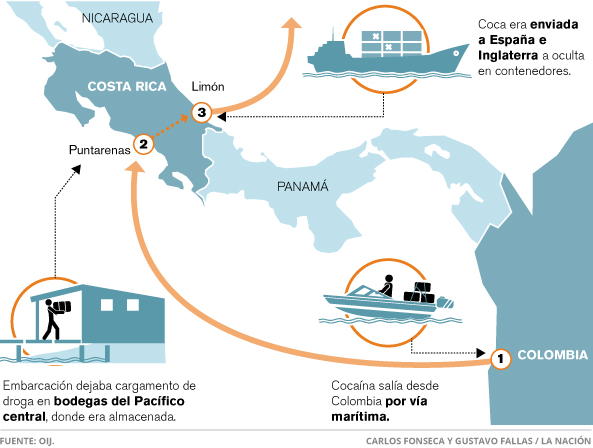 Since January 2016, a joint task force by the OIJ, Dirección de Inteligencia y Seguridad Nacional (DIS) and U.S. Drug Enforcement Administration (DEA) led to the arrest of 21 people (11 during the course of the investigation and 10 on Friday).

According to the investigation, the organization imported the illegal drug from Colombia by sea, stored it in Puntarenas, moving to Limon for shipments hidden in containers sent to the United States, Spain and England.