OIJ Have Their Man, Arresting The Only Suspect In The Liberia Massacre

Q COSTA RICA – An early morning raid in Liberia this Friday morning resulted in the arrest of the only suspect in the massacre of the five university students, and seriously wounding a sixth.

The man, identified as Rios Mairena, 33 years old, who is parole, is described by authorities as a ‘very violent man’ , lived next door to his victims, and is a relative of the landlord renting to young university students.

According to the Organismo de Investigación Judicial (OIJ) profile, Rios Mairena is extremely violent, hostile and a drug addict.

The savage crime occurred on the morning of Thursday, January 19, in a room in a house in the Liberia barrio of La Victoria, where the suspect tied up and gagged each of the victims and then slit their throats with what investigators believe a kitchen knife.

All five victims lived in the aparment, a few metres from their alleged attacker. A sixth, a 14 year old girl, was visiting one of the victims at the time, was seriously wounded but lived to give investigators a description.

The deceased were identified as Stephanie Hernandez, Joseph Briones, Dayanna Martinez, Ingrid Méndez and Ariel Vargas. Four of them were students of the University of Costa Rica (UCR).

The 14 year old was discharged from the Enrique Baltodano hospital in Liberia on Thursday.

The motive of the multiple murders is still a mystery. Investigators theorize that the suspect had possibly sexual fantasies with one or more of the victims. Another theory the combination of consuming drugs and his violent nature.

Despite a public manhunt, autorities releasing to the a skecth and almost 100 tips to the police hotline, Rios Mairena never fled, he stayed put in the house he lived with his mother and stepfather, just across the corridor where the massacre occurred.

In fact, a La Nacion correspondent following on the story days after the massacre, on January 23 captured photos of Rios Mairena painting a courtyard wall next to the door where the students had been killed. Next is the door to where lived the couple who had received the text message from one of the victims.

Seeing that he was being photographed, he told Rebeca Álvarez that “no, no, I don’t play that way. Go away”.

Walter Espinoza, head of the OIJ, explained – in a press conference after the arrest of the suspect – in the search of the house investigators found the knife, shorts and shoes with traces of blood believed to be of the victims.

A bloody fingerprint from the crime scene and other evidence led authorities to Rios Mairena.

But how was one person able to tie up, gag and kill five people and almost kill a sixth?

Authorities say the suspect had easy access to the apartment, a key to get in and out at will. In addition, there is evidence that he was friendly with the victims, having shared time with them hours prior.

During the conference, Espinoza reiterated that during the investigation they were able to establish clearly that the suspect is narcissistic, of few friends, extremely violent, sadistic, hostile and aggressive.

Rios Mairena, according to Espinoza, is the type of individual who does not empathize with others and to all this there is documented history of drug consumption that could have fed his recurrent compulsive sexual fantasy with one or more of the female victims, that could have motivated him to commit the crime.

Another question being asked today is, why was Rios Mairena free after being convicted to eights years in prison for drug trafficking?

The conviction was in July 2012, a year after his arrest and in preventive detention since July 2011. 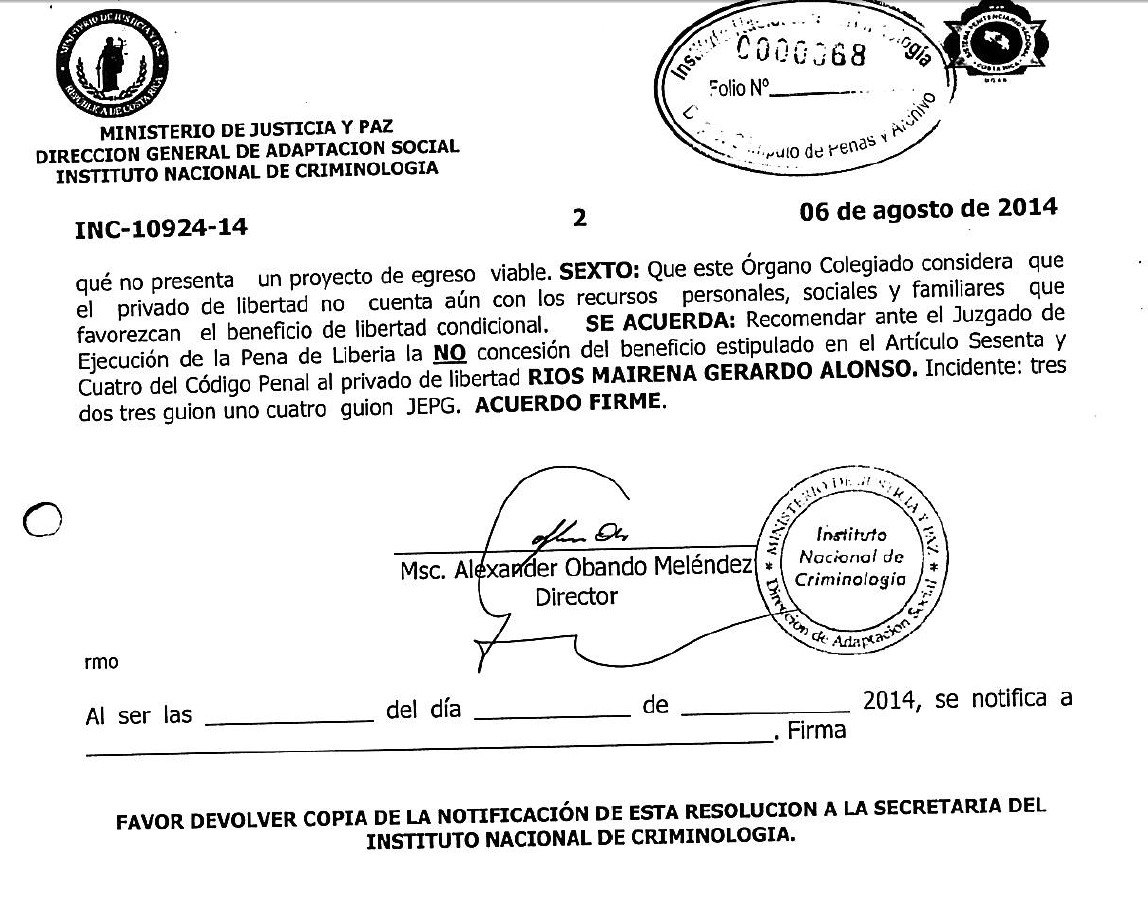 The suspect was paroled in 2015. Ddespite the opposition by the Instituto Nacional de Criminología (National Institute of Criminology), a Liberia judge ordered his conditional release.