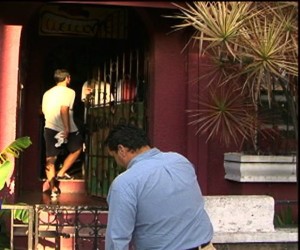 On Monday, an alumnus of a Dutch secondary school in Leiden threatened to shoot up the school. Thanks to computer experts and officials of the city of Leiden, they were able to determine that the computer used by the suspect was located in Costa Rica.

The investigation into the threat led the Royal Dutch Polie to contact the Organismo de Investigacion Judical (OIJ) in Costa Rica.

Based on the IP information, it led OIJ officials to a hostel in Sabana Este, who were able to confirm the identity of the suspest and that he had been a guest at the hostel for several months.

Meanwhile, officials in Leiden lowered their alert level based on the OIJ information, re-opening the school after Monday’s closure.

The hostel manager told the OIJ that the young man had left for Puerto Viejo de Limón days before. But, that didn’t detract Costa Rican officials in their intent to find the man.

It was around 5:30pm Thursday when the OIJ was able to locate the man seeking refuge in the Dutch Embassy in San José.

Francisco Segura, director of the OIJ, confirmed the location of the young man and explaiend that no arrest had been made and that the Dutch Embassy has offered to pay for the ticket back to his home country.