On Average, 231 Traffic Tickets A Day Issued In First Months of the Year 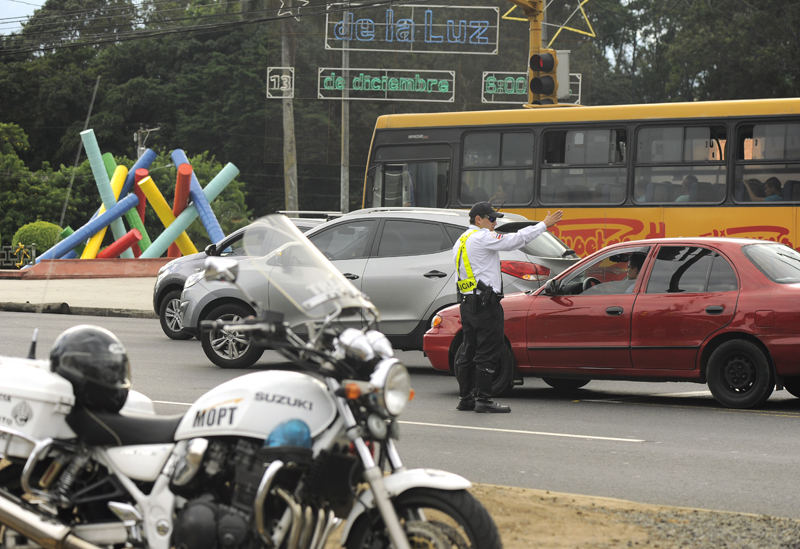 (QCOSTARICA) Bad driving, careless driving, bad road design and poor enforcement due to lack of traffic officials are the factors behind the growing number of accidents on Costa Rica’s roads.

The Policia de Transito (traffic police) reports attending 41, 779 accidents between January 1 and June 30 of this year, that is on average 231 a day and 10 per hour, resulting in 202 fatalities and 5,776 people injured.

The Cruz Roja (Red Cross) reports that over 60% of its resources are spent on handling emergencies in traffic accidents.

According to Mario Calderon, the director of the traffic police, most accidents are caused by driver recklessness and aggressive driving behaviour (road rage).

The Policia de Transito is a police force of only 900 traffic officials (Transitos), working around the clock in three shifts, for the entire country. Calderon says people complain about the that the lack of police presence on the roads, but it’s simply due to the lack of human resources: some 300 officials on any given shift patrolling some 35,000 kilometres of national and cantonal roads.

“A simple traffic accident can take up 90 minutes of an official’s time,” says Calderon.

Drunk driving continues to be problem. In the first half of the year a total of 975 drivers – on average 5 per day – were caught driving while intoxicated and responsible for at least 15 road fatalities, up from 10 in the same period last year.

In addition to the arrests, 163 drivers of the 9,359 submitted to a drunk driving test, were fined ¢306.448 colones for driving under the influence of alcohol, but not reaching the legal limit of criminal conduct.

A driver found with a blood alcohol content of between 0.50 and 0.75 in breathalyzer or 0.25 or 0.38 in a blood test will be fined and six points deducted from their license, over those limitsthe driver is handed over to the criminal courts for criminal prosecution.

In sanctions not related to driving under the influence, the Policia de Transito reports issuing 116,518 traffic fines, of which 10,781 were caught driving without a license (¢103,544 colones).

Other violations include not having the vehicle registration, illegal polarization of glass (front and rear windows), or driving a right-handed vehicle, that totalled 15,754 fines, each for ¢51,249 colones.

The Policia de Transito also reports the confiscation of 3,819 vehicles and 15,719 license plates.

QCOSTARICA - Avianca, the Colombian airline, announced that it will resume...
Read more

QCOSTARICA - Of the 410,000 people with inquiries related to the...
Read more

QCOSTARICA - After a few days of new cases daily under 1000, on Wednesday, October 28, the Ministry of Health reported 1,321 new cases. Costa...
National

QCOSTARICA - The mandatory vehicle insurance - Seguro Obligatorio de los Vehículos (SOA), one of the components that are part of the Marchamo, will...
HQ

QCOSTARICA - A Costa Rican man took his Facebook block to the Constiutional Court or Sala VI, claiming that the social network had prohibited...
Reports

After founder’s murder and $47M pact with the feds, widow seeks to license offshore sports-betting giant in N.J.

Q REPORTS - It has been two years since her flip-flop-wearing, math-whiz husband disappeared. “It feels like 20,” says sports-betting business-owner Laura Varela, a...
Health

QCOSTARICA - A one-year-old boy with the new coronavirus, has been in the Intensive Care Unit (ICU) of the Hospital Nacional de Niños (HNN)...