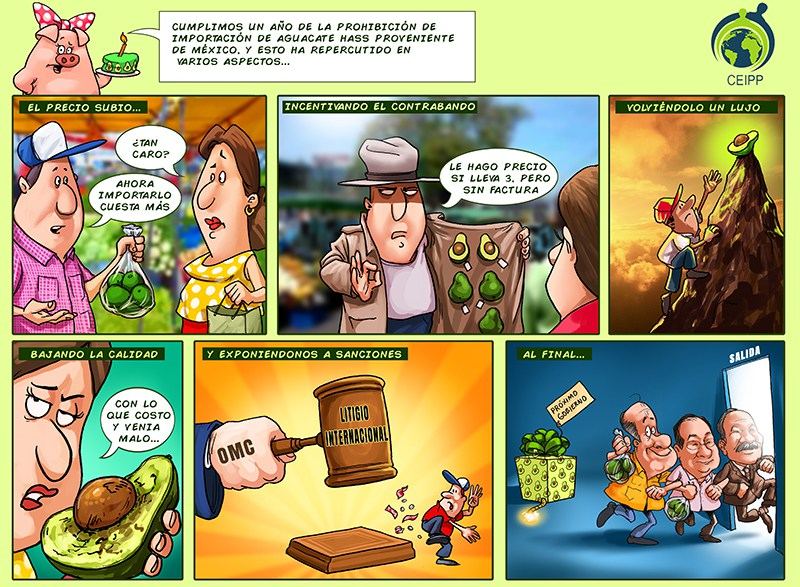 QCOSTARICA – A year ago last week, Costa Rica took the unilateral decision to stop importing the Hass avocado from Mexico after claiming that it had a plague that could endanger the country.

Now, avocado prices have almost doubled, the smuggling of Mexican avocados from the borders with Panama continues to increase, and Costa Rican businessmen are stating that Costa Rica is at the doors of a million dollar claim because of the government’s arrogance.
Producers estimate that Costa Rica might be sanctioned with 500,000 euro for having stopped importing Mexican avocados without complying with the requirements established by the World Trade Organization.
The ban on Mexican avocado imports has only had negative effects for consumers and caused distortions in the market, as the product’s price has even been 87% higher than its historic value in the last five years.
There are also many complaints on social networks because the fruit imported from other destinations has a lower quality than the Mexican avocado, and because there have been temporary shortages of fruit and a strong smuggling of Mexican avocados from Panama.
“In this situation there has been only losers. Consumers are paying more for a lower quality product, restaurants recorded a 20% waste increase in the product they purchase for their dishes, and the treasury has stopped receiving revenues because much of the product being sold on the street is smuggled, “said Randall Benavides, president of the Chamber of Exporters and Importers of Perishables (CEIPP).
Representatives of Costa Rica and Mexico have had at least six meetings to find a solution to the conflict, but to no avail.
“Studies by international Costa Rican scientists reveal the presence of the viroid in Costa Rica. However, the government denies it and does not allow conducting a joint investigation to officially verify the presence of this virus so as to initiate the necessary actions to treat the disease that only affects the foliage of the trees and the appearance of the fruit, not the human beings,” said Benavides.
Source: elmundo.cr

Deportations to the Northern Triangle of Central America soar by 32.1% in 2021

Q24N (EFE) The accumulated deportations to November to the Northern Triangle...
Read more

QCOSTARICA - Owners of some 800,000 vehicles with overdue...
National