Only 571 Costa Ricans Have A Doctorate 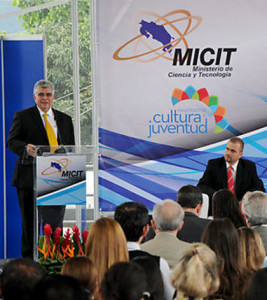 During the presentation ceremony of the report, an activity that took place on November 29 at the Casa del Cuño, antigua Aduana, Molina said the country has increased the number of Costa Ricans with doctorates from 534 in 2010 to 571 in 2011. The figure corresponds to a 0.3% of professionals with graduate degrees.

In the opinion of Minister Molina, a challenge is needed across the country, because the figure is very low and it must increased in the future.

Another issue of concern is that the majority, or 70% of postgraduate studies in the country are in the Social Sciences.

“Developed societies require progress on many fronts, one of them is in education and human resource training”, says Molina.

For the Minister it is important that new generations focus on postgraduate studies in areas like Engineering Sciences and Technology, Basic Sciences and Natural and Health Sciences.

The report data shows that 78% of those who obtained a doctorate in the Academic field did so in the U.S., Europe and Canada and 70% are male and 30% female.

QCOSTARICA - Friday night, Costa Rica paid tribute to the memory of all the people who have lost their lives due to the pandemic...
Health

QCOSTARICA - Five of the 82 cantons of Costa Rica register fewer than 10 active cases of covid-19 to this date, according to the...
Guatemala

Q24N - Guatemala on Tuesday received 200,000 doses of the vaccine against covid-19 donated by India, which it will use to complete the immunization...
The Americas

Q REPORTS - Former US President Donald Trump's policy of maximum pressure on the Venezuelan dictatorship failed to dislodge the regime or alleviate the...
Health

QCOSTARICA - A total of 24 travelers, so far, face problems with the law when discovered trying to leave Costa Rica, through the San...
Pura Vida

QCOSTARICA - To commemorate the Bicentennial of Costa Rica that occurs in 2021, Inverse Project has designed the Torre del Bicentenario for this important...
Pura Vida

FINCA PARAISO (QCOSTARICA) At this time of the year many forested parts of Costa Rica are alive with the song of chicharras, cicadas. They...
Latin America

Q REPORTS - Poverty in Latin America increased in 2020 to the highest levels in the last 12 years, reaching 33.7% of the total...
Infrastructure