If the Unimer public opinion poll of President Laura Chinchilla is accurate, then the citizen view of her performance hasn’t declined much, but that ain’t good, either. 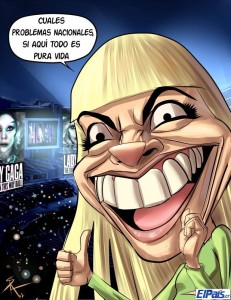 Positive evaluations went down a hair from 13%  in July to 12% — down in the range of U.S. polls measuring President Richard Nixon’s popularity just before his resignation. The negative opinion remained at 53%.

Chinchilla’s poll figures began their decline in September last year, according to the Unimer survey commissioned by the national newspaper La Nacion.

Specifically, 29 out of every hundred Ticos viewed her performance as so-so and 24 as very bad. What was especially telling is that none of those surveyed characterized her work as “very good.”

But the harshest criticism came from the 18-24 year olds, a segment of the population she did especially well with during the 2010 election. Also, her party has targeted that age group for the 2014 election.

Also severe was the segment of the population living in the Greater Metropolitan Area, where half the people are concentrated. As in April and July of this year, 9 out of 10 Ticos surveyed said that Chinchilla has no control over the direction her Administration takes.

Costa Ricans had an especially low opinion of the cabinet, saying that she showed a lack of leadership and was badly advised, citing the border road debacle as an example. That construction was especially the reason why 8 of 10 Ticos cited errors the government has made.

But the view of the citizen in the street of the President’s cabinet was no better — 65% considered their work, taken as a whole, as “bad” or “very bad.” Only 7% judged it good.

And what was the Administration’s response to such grim reviews? As usual it fell upon Information Minister Francisco Chacon to act as spinmeister. He assured La Nacion that the Administration can recuperate in the next polls.

Naturally, he emphasized the fact that Chinchilla had stopped slipping in the polls. He pointed to an improvement in security, prudent management of the economy and an increase in employment figures.

Commentary: Actually, we hate to admit it, but Chacon has settled on three important points of success. But Ticos are not fools (well, most of them aren’t) and they know trouble when they see it.

Unfortunately, the President’s control over her officials has been as uncertain as a hippopotamus on a mud bank.

QCOSTARICA - From the start of the vaccination program against covid-19 on December 24, 2020, 193,273 doses have already been applied countrywide.   Of this total,...
Business

QCOSTARICA - Panasonic announced that it will invest US$10 million dollars in the expansion of its plant in Costa Rica, in order to move...
National

QCOSTARICA - For their preparedness to face tsunamis, the communities of Tamarindo and Sámara were recognized by the Junta Nacional Tsunami Ready de Costa...
Business

QCOSTARICA -Viatris, one of the largest generic drug manufacturers in the world, announced the opening of commercial operations in Costa Rica, with an initial...
Employment

QCOSTARICA - The latest unemployment figures show that women have been affected the most during the pandemic: more than a quarter of the female...
National

QCOSTARICA - After almost three years of starting the work and four before that to the get contract awarded, authorities of the governments of...
Rico's Covid-19 Digest

QCOSTARICA - Before I get into my opinion of the irresponsible actions of the immigration service and the ICT, good news for tourists who...