Ortega flew to Venezuela on Saturday to criticize US meddling 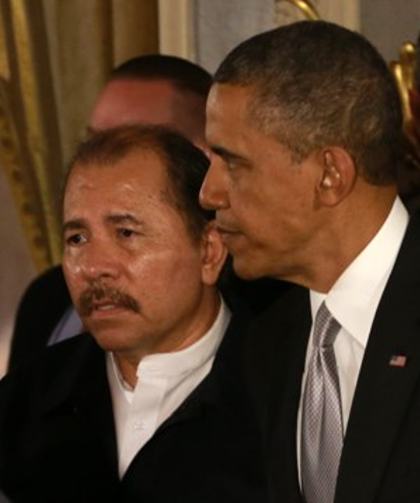 President Daniel Ortega sat at the dinner table with Obama and his fellow Central American presidents.

Taking the liberty to speak on behalf of “the people of Latin America, the people of the Caribbean and, in particular the people who are part of ALBA and Petrocaribe,” Ortega expressed hemispheric solidarity with Maduro’s government, which he said “is facing an onslaught from the historic enemies of revolutionary processes.”

The “historic enemy,” whose president was Ortega’s dinner companion the night before, is accused of taking an aggressive stance against Venezuela by calling on its government to respect democracy and human rights.

In a recent interview with Noticias Telemundo, Obama said his government wants Venezuela to be able to “choose their own leadership in fair and free elections in a democratic process that is credible.”

The U.S. president denied that his government has “tried to interfere in any way with what happens there.”

“What we’ve said is, let’s make sure that the rules are being followed, that people are not being thrown into jail or intimidated, that the press is allowed to report fairly on what happens, that the ruling party doesn’t resort to intimidation in terms of skewing results,” Obama said.

The U.S. president declined to comment on whether the U.S. government will join the rest of the hemisphere in recognizing last month’s election results in Venezuela, which have been decried as fraudulent by opposition candidate Henrique Capriles.

“When you want to do intelligence work in another country, all those big powers do this type of spying—they often use the facade of a filmmaker, documentary-maker, photographer or journalist,” Venezuela’s Interior Minister Miguel Rodriguez told government-run TV on Sunday.
Venezuela accuses Obama of inciting ‘dogs of war’

Venezuela on Saturday responded to Obama’s brief comments about its democracy with an angry and grandiloquent statement that accuses the U.S. of “meddling” and reminds the U.S. president of Venezuela’s “novel public policies that allow everyone who lives in our dignified country to have more and better guarantees to gain access to civil rights, political rights, economic rights, social rights, cultural rights and the collective rights of the people.”

In a lengthy prepared statement released by the Ministry of Popular Power for Foreign Relations, the Venezuelan governmentblames Obama for worsening bilateral relations and “confirming to the world the policy of aggression that you and you government maintain toward our nation.”

Venezuela went on to accuse Obama of trying to incite “the dogs of war” to spark violence and create chaos in Venezuela to “justify imperialist intervention.”

“Know this, friends of the world: The son of Liberator Simón Bolívar and Comandante Chávez are ready to defend our rights to be free against any imperial domination,” the statement reads. “Compatriots, we raise the slingshot of David to confront the new aggression by Goliath!”
Politics make bad dinner conversation

Despite echoing Venezuela’s revolutionary bravado during this weekend’s Petrocaribe summit in Caracas, Ortega was on his best behavior 24 hours earlier during his roundtable dinner with Obama and the other presidents of Central America. Instead of bringing David’s sling to the summit, Ortega brought his dinner napkin and an earpiece to listen to the translation of Obama’s table talk.

Other than a few brief comments offered to the press upon his arrival at Costa Rica Juan Santamaría Airport on Friday afternoon, President Ortega’s participation in the Central American summit with Obama appeared to be minimal. Even when the conversation turned to topics on which Ortega had reason to boast about his country’s impressive gains in recent years—advances in clean energy technologies, increased trade and investment under CAFTA, and citizen security—the Nicaraguan president remained mostly quiet.

Costa Rican news outlets reported that Ortega was one of the few presidents who declined to give any comments upon exiting from the closed-door meeting with Obama. Hours later, Ortega hastily departed Costa Rica to fly to Venezuela, skipping out on a meeting that Obama and several of his colleagues held with Central American business leaders to discuss ways to increase investment and joint development initiatives in the region.

While Ortega’s participation in both summits suggests he is still trying to straddle the growing divide between Venezuela and the U.S., it becomes strange theater when he tries to play both roles in the same 48 hours.