EntertainmentCine (Movies)
By Rico
5 May 2013 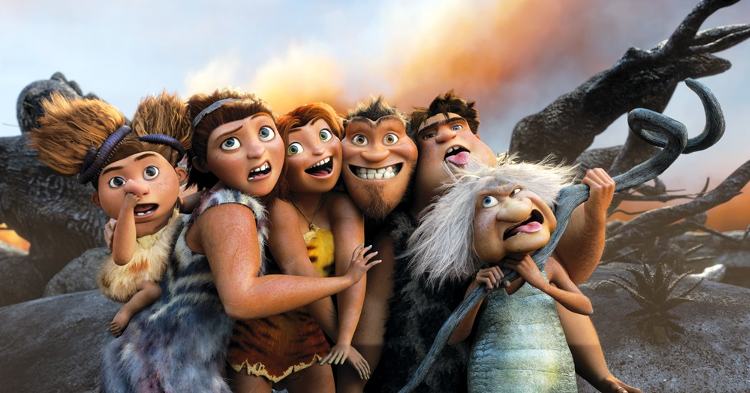 Storyline: The Croods is a prehistoric comedy adventure that follows the world’s first family as they embark on a journey of a lifetime when the cave that has always shielded them from danger is destroyed. Traveling across a spectacular landscape, the Croods discover an incredible new world filled with fantastic creatures — and their outlook is changed forever. 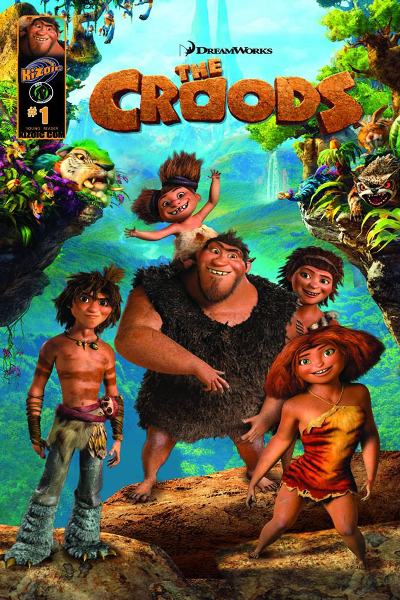 Review: What do we teach our children? All cartoons are to some extent tools for passing on the messages that we think kids should know – but what are those messages? ‘Don’t talk to strangers’, for instance. Pinocchio talked to strangers, and look what happened to him. ‘It’s OK to be different’: Dumbo had big ears, and that’s perfectly fine. Both those examples are 70 years old, but the second message is bigger than ever in our age of diversity (‘Don’t talk to strangers’ seems to have fallen by the wayside, maybe because kids are cooped up at home these days anyway). But we’ve also seen a new message in the past few years, driven perhaps by recessions and new technologies, first in the Ice Age franchise and now in The Croods: The world is changing. The old rules are no longer valid. Adapt or die.

The Croods is a clever, slightly formulaic cartoon from the folks behind How to Train Your Dragon. There’s a Homer Simpson-ish dad (voiced by Nicolas Cage) whose bossiness barely disguises his uselessness. There’s a ‘spunky’ teenage-girl heroine (Emma Stone) straining at the patriarchal leash, though she does become more generic once her warrior-woman credentials have been established (‘Girls are just as good as boys, and probably better’ is another of those messages we want kids to know). There’s a family – feral toddler, pudgy younger brother, crotchety grandma – and family values galore. There are visual marvels, especially once the dank Stone Age setting turns into a world of dandelions, tendrils and eye-popping colours. There are hungry monsters, funny jokes and slapstick set-pieces.

The film can be viewed simply as a Hollywood cartoon. Does it work? It does. Will kids love it? They will. Is it scary? Not really, though some of the details are macabre (like our heroine Eep recalling the demise of her various caveman neighbours) and the hungry critters have big teeth. Is it funny? Surprisingly, yes – and, despite the title, crude humour isn’t allowed to take over (there isn’t a single fart joke). The slapstick is over-extended, and there’s probably too many of those moments where the music swells inspirationally – but The Croods, even in itself, wipes the floor with all four Ice Ages.

That’s not all, however – because the film also speaks to us in post-debacle Cyprus in a way that goes beyond its cartoon ambitions. Maybe it’s pretentious to view it as a kind of unintended metaphor – but films don’t exist in a vacuum, and any adult sitting in the K-Cineplex with his/her kids can’t fail to recognise our own situation in the story of the Croods, a Stone Age clan who live in a cave, nice and snug and protected from outside dangers, at least till their world literally collapses in an epoch-defining earthquake and they have to start anew. It’s not just their circumstances that change; they also have to change their mentality, specifically Papa Crood’s conservative insistence that “new” equals dangerous.

Enter Guy (Ryan Reynolds), an inventive young orphan who has everything the Croods lack: creativity, modernity, civilisation, above all “ideas”. Guy wears shoes and eats from a plate; he wears a belt, albeit a living belt (called Belt) who punctuates his warnings about the End of the World with a cheerful “dun dun duuuuunnnn!”. He also introduces the clan to concepts like jokes and leftovers, not to mention pets (“It’s an animal you don’t eat,” he explains; “We call those ‘children’,” replies Grandma). This may be the most unexpectedly touching aspect of The Croods, the notion of discovering the world for the first time – and the way the family blossom once they allow themselves to try something new. The feral baby speaks her first words. The boy finds a dog, and even Grandma starts to reminisce: “I was in love once. He was a hunter, I was a gatherer…” 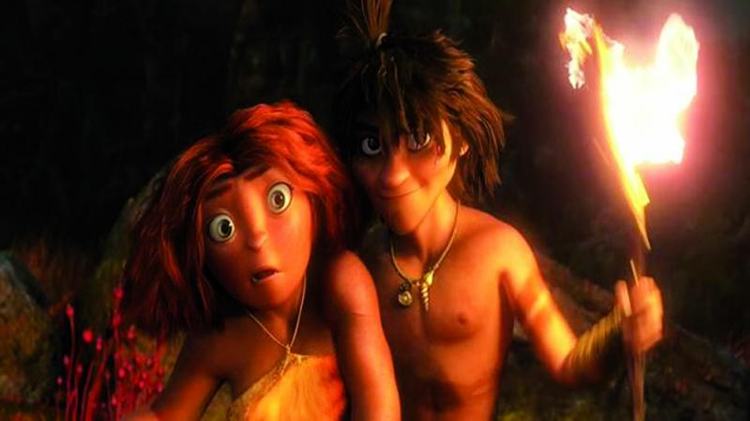 The film is very American. Not in the dismissive way people sometimes use those words, but in the specific sense that America, more than any other culture, stresses creativity and adaptability in the face of crisis. Americans who lose their jobs simply move to another part of America and start over (it’s the legacy of being a nation of immigrants). Watching The Croods from our own vantage-point – not as wide-eyed children absorbing messages, but as adult chaperones trying to make sense of a world that’s been struck by a fiscal earthquake in the past month – it’s easy to get caught up in the story Guy tells the Croods (except Papa, who skulks in the background grumpily). It’s the story of a bold young tiger who wanders away from the stultifying safety of the cave, goes to the very edge of a forbidden cliff – then, having dared to take a risk and think outside the box, flies off into the sun. ‘Where did she fly to?’ ask the Crood kids, entranced. Tomorrow, replies Guy. She flew off to Tomorrow, a place of a thousand suns – “a place where things are better”. Let’s hope so.

QCOSTARICA - The sustained growth in the arrival of...
News