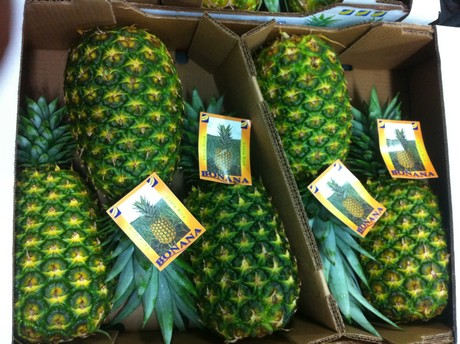 One would think that high production of an export product would have farmers dancing on the roof, but lately an over production of pineapple has tanked prices. The problem is an excess of success: Costa Rica produces 84% of the pineapple bought in the U.S. and 83% in Europe. 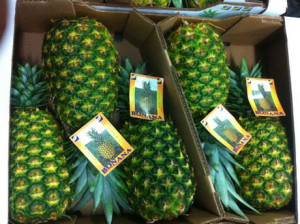 The peaking of production has caused marketers in Europe to become quite picky about what they buy — they are rejecting pineapple that are too large. In the delicate export industry, size does matter but bigger isn’t necessarily better.

Overproduction of pineapple is a natural phenomenon caused in certain times of year by something called “floración”. This happens when more fruit develops on the plant, causing a higher than normal production. But marketing is the law of supply and demand and when the production outstrips demand, the price falls.

(At one time, the small farmers in the country did not understand this, especially in raising beans. When the price dropped one year and farmers had trouble selling production, they were discouraged from planting the next year. Due to a scarcity, the price was up the next year and farmers planted more beans, which lowered the price… a classic roller coaster.)

The excess this year has affected prices in a predictable way — the exporter Hispacori told La Nacion that in Europe pineapple is going at six Euros per box of 10-12 pounds. instead of the normal nine. According to the publication FreshPlaza, Costa Rican pineapple was going at 8.50 to 10.50 euros and in mid-May 7-8.50.

But this is a boon to local pineapple lovers because the excess is being dumped on the local market at a lower price — and they are BIG due to the unfathomable tendency of overseas marketers to turn their backs on a king-sized fruit.

In the 20th century, when Hawaii was king of pineapple, researchers developed a strain of a certain size — not too big — so it would fit in a tin can. So tell it to your girlfriend — bigger isn’t always better.