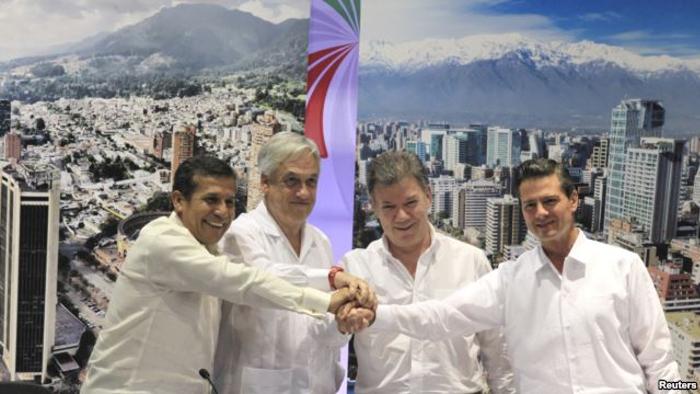 CARTAGENA, Colombia – The presidents of the Pacific Alliance signed a pact to eliminate tariffs on 92% of goods and services exchanged among the four member countries.

Tariffs on the remaining 8% are considered “sensitive” and will be discussed at future meetings.

The accord is the first addition to the Framework Agreement, which launched the Pacific Alliance in June 2012.

“This is the most innovative integration mechanism that Mexico has signed in recent years,” said Peña Nieto, adding the four nations are preparing to create “a more productive and more competitive region.”

The Pacific Alliance, created in 2012, aims to integrate free markets in trade, energy and infrastructure, and bolster ties with Asia, a key trading partner.

The trade protocol, broadly agreed to in principle at a previous meeting last year, will eliminate 92 percent of the tariffs between the member countries once their respective parliaments ratify the deal, and will phase out the remainder gradually.

“This translates into more investment, more competitiveness and as a consequence, more employment, and good quality employment. This is the fundamental purpose of this whole exercise,” said Colombian President Juan Manuel Santos.

The deal, signed in the colonial Colombian city of Cartagena, will also create a fund to finance infrastructure investments within the four member countries and establish a joint system to monitor and control the price of medicines.

Like other emerging economies, Latin American markets have been buffeted in recent weeks by signs of tighter monetary policy in the United States that has prompted investors to sell off investments, causing these countries’ currencies to weaken.

The bloc is expected to seek more clout in Latin America by promoting free trade and focusing on fast-growing Asian economies as an alternative to the protectionist policies championed by Mercosur members such as Argentina and Venezuela.

“In this large market that our countries of more than 210 million consumers comprise, we will truly be able to establish integration… and contribute to greater Latin-American integration,” said Mexican President Enrique Pena Nieto.

Today, Wednesday, June 9, only EVENS can circulate. The measure is countrywide and applied between 5:00 am and 9:00 pm, save for those under the...
Tourism

QCOSTARICA - This Sunday, the Guanacaste Airport - a member of the VINCI Airports network - received the first of the daily flights from...
Cartago

QCOSTARICA - A truck loaded with wood, lost its braking power, rolled down a slope for almost a kilometer, dragging in its path an...