Pandora Papers: How the fight against tax evasion is going

Fresh revelations about how politicians, celebrities and billionaires stash their wealth offshore have sparked calls for a tougher response. DW explores what has been achieved in the fight against tax evasion.

Q REPORTS – The Pandora Papers is the latest global media investigation into the use of offshore tax havens by world leaders, business people, and celebrities to hide assets worth hundreds of millions of dollars.

The revelations are further proof of how dirty money from dictatorships and struggling democracies flows into developed economies and tax havens.

The fight against tax avoidance has become a political hot potato since the first probe by the International Consortium of Investigative Journalists (ICIJ) in November 2013 when a “who’s who” was revealed of people and entities hiding assets offshore in 122,000 companies run from Singapore and the British Virgin Islands.

Two months later, the group revealed how China’s elite, including several people close to President Xi Jinping, parked money in offshore tax havens. Later that year, the ICIJ’s so-called LuxLeaks investigation showed that multinational corporations such as Amazon, Apple, IKEA, Pepsi, AIG and Verizon had made secret agreements with the Luxembourg government to avoid paying billions of dollars in taxes.

In 2016, the Panama Papers detailed more than 200,000 offshore entities set up through the law firm Mossack Fonseca. A year later, the Paradise Papers revealed leaks from the Bermuda-based offshore specialist Appleby. In 2020, the FinCEN files revealed details of over 200,000 suspicious financial transactions, valued at over US$2 trillion (€1.72 trillion).

How big is tax avoidance globally?

Last year, a report by three groups including the UK-based Tax Justice Network, estimated that governments around the world lose US$427 billion each year to tax avoidance and evasion by companies and wealthy individuals.

The report found that multinationals shift US$1.38 trillion worth of profit each year into tax havens.

In the 2017 book, The Hidden Wealth of Nations: The Scourge of Tax Havens, Gabriel Zucman wrote that tax havens were holding nearly US$8 trillion in global wealth — 75% of it undeclared.

Last month, the European Union estimated that Europe’s biggest banks book an average of €20 billion (US$23.3 billion) in profits annually to tax havens.

Julia Wallace, the deputy editor-in-chief of the Organized Crime and Corruption Reporting Project — a network of investigative journalists involved in the Pandora Papers probe — told DW that the offshore service industry has created “astoundingly complicated webs and networks of ownership companies stacked on companies that are very hard to unravel.”

“These providers are lawyers and people who set up companies, and they do such a good job of making these intricate structures that you, I and anyone on the street would never be able to figure it out if it weren’t for this kind of leak.” 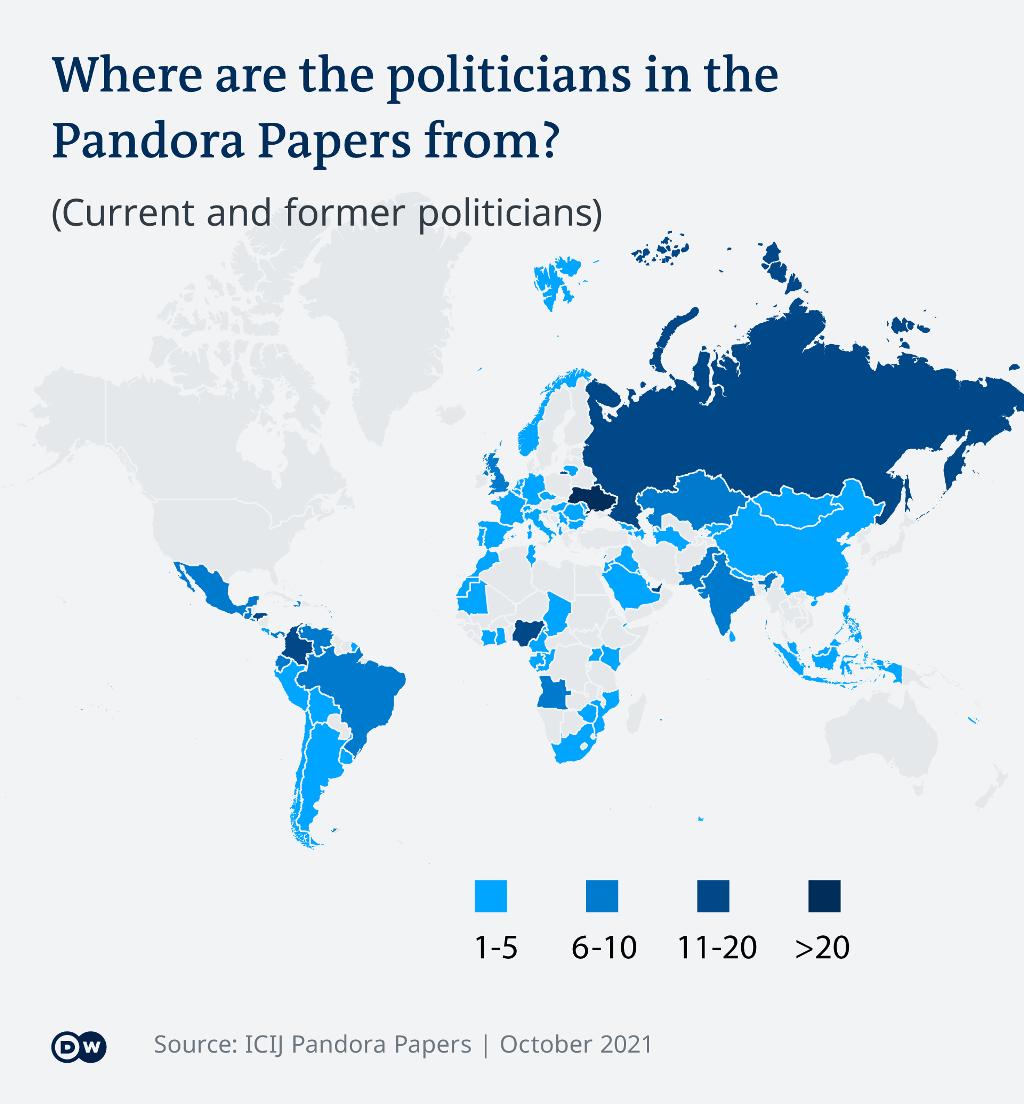 How are governments cracking down on tax avoidance?

Proposals to stifle corporation tax havens were agreed by leaders of the Group of 20 (G20) major economies in July, which will set a global minimum corporate tax rate of 15% for large multinationals.

The plan would make it less profitable for firms like Facebook and Google to make use of low-tax regimes like Ireland and the Cayman Islands, and force companies to pay more taxes where they actually operate.

However, the proposals need to pass the US Congress — a tricky maneuver given the opposition of several Republican lawmakers, who say it will make American firms less competitive.

Several low-tax countries are also against the plans, which they say could limit foreign investment in their nations.

The proposals also won’t cover wealthy individuals — especially those from authoritarian states who can hide their fortunes offshore with impunity.

Most EU countries have approved a new bloc-wide tax transparency tool that seeks to ensure firms with total revenues of around €750 million — doing business in the EU through subsidiaries — will have to comply with the same rules as EU companies.

The EU also keeps a blacklist of noncooperative tax havens which is updated twice a year. Panama, Seychelles, Fiji and the US Virgin Islands are on the list. EU states have been requested to impose sanctions on those countries on the list. The EU Tax Observatory was launched in June to help in the fight against “tax abuse.”

However, many commentators have warned that governments still aren’t doing enough to clamp down on tax avoidance.

“We are living in a time where governments need a lot of money … to basically fight this pandemic,” Frederik Obermaier, a journalist with Süddeutsche Zeitung newspaper, who is part of the ICIJ, told DW.

Obermaier added that the shortfall was caused by the wealthiest people “evading or minimizing and avoiding their taxes and their fair share to our society.”

Has anyone been punished?

More than 150 investigations were launched in more than 70 countries as a result of the Panama Papers scandal alone. Several high-profile figures and organizers identified by the ICIJ have also taken legal action to try to clear their names.

However, many of the complicated and opaque structures set up in tax havens aren’t illegal, including shell companies — firms that exist only on paper and don’t carry out day-to-day business operations.

The political casualties include Pakistan’s then-Prime Minister Nawaz Sharif, who resigned and was banned from running for office after being found guilty of corruption following links to the Panama Papers scandal. He was later jailed for 10 years but was allowed to travel to London for medical treatment. Two years later, he has yet to return to Pakistan.

Iceland’s prime minister, Sigmundur David Gunnlaugsson, was forced to step down in 2016 over revelations that his family had sheltered money offshore.

The pair had been arrested and jailed after the Panama Papers scandal broke, but were later released on bail.