Partial and Total Closures On Circunvalacion 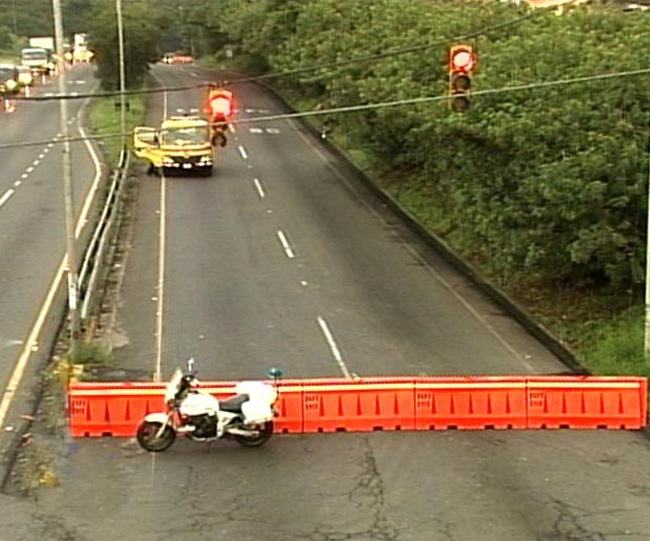 Travelling the Circunvalación just got more complicated with partial and total closures that will be daily during the coming months.

The Policia de Tránsito confirmed this morning that, between Hatillo 8 and Pavas – westbound – the road will be completely closed between 8pm an 5am every night. During the day, there will be partial and temporary total closures.

This morning, for example, othe two lanes eastbound lanes of the Circunvalación was reduce to one, allowing for the other to be used for westbound traffic.

The “reversible” lane measure will be applied when there is a total closure of the westbound lanes.

Traffic through the area has been a nightmare since Sunday when huge sinkhole opened up beside the highway, threatening to consume the road completely.

The Ministerio de Obras Publicas y Transportes (MOPT) decided to advance the installation of two Bailey bridges, beginning the process this Tuesday morning rather than wait until the weekend, as had been announced yesterday.

MOPT officials are qualifying the situation “very critical” and studies of topologists, geologists and other experts are going ahead feverishly.

This is not the first time such a situation has occurred during the rainy season.

A huge sinkhole in the middle of the lanes of the Autopista General Cañas, the most travelled road in the country, affected drivers for months last year.

In the case of the Circunvalacion, traffic in the areas of La Sabana, Escazú and Pavas are directly affected.

Q REPORTS (Bloomberg) The Biden administration is working on...
#Cyberattack