Paso Ancho Congestion To Continue For The Coming Month

COSTA RICA NEWS – Friday’s traffic congestion in the area of Paso Ancho rotonda is an example of what will be for the coming month, with the start of the demolition of buildings to make way for the reconstruction of the intersection, that will include an underpass. 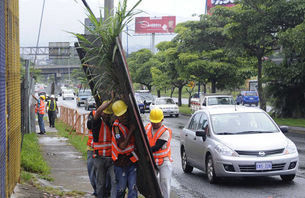 According to the project manager for the project, Kenneth Solano, he told La Nacion that drivers will feel less effect once work crews end the manual labour off the public street.

However, the traffic congestion will renew again once the Consejo Nacional de Vialidad (Conavi) effects the closure of one westbound lane, from the Parque de la Paz to the rotonda.

The lane closure is to ensure driver and worker safety,

The Policia de Tránsito (traffic police) will have a permanent presence in the area, to move the more than 90.000 vehicles that pass through the rotonda daily.

The re-construction of the Paso Ancho intersection is expected to take 14 months, with work crews working daily on the site.