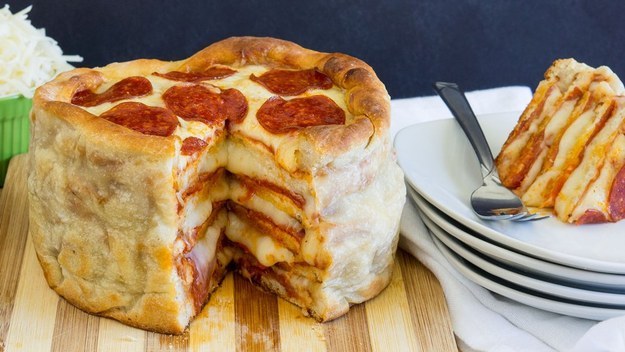 COSTA RICA EXTRA — This is a pepperoni pizza cake, which is just a layer of pizza, topped with another layer, and another, and…sorry, drooling.

The pizza-cake craze started when a Canadian pizza chain made a version of a pizza cake. And a brave redditor then created her own cake as well.
Now Pillsbury has published a super-easy recipe for pepperoni pizza cake that will take you about an hour to make.
Instead of a homemade pizza crust, you can use two cans of Pillsbury refrigerated crust to save time.

Roll out the dough, and cut out five circles wide enough to fit the tall cake pan you plan to use. (Two circles will be the bottom and top layers, and the remaining three will go in the middle of your pizza cake.)

Then you’ll start to layer your cake with dough, pizza sauce, shredded mozzarella, and glorious pepperoni

The top layer should have a raised crust, much like a normal pizza, because YES.

Then you bake your cake for 20–25 minutes, take it out of the oven, and weep tears of joy.

You can even brush the sides with melted butter if you’re feeling ~fancy~.

So in just a little over an hour, roughly the same time it takes to order a pizza, pepperoni pizza cake could be yours.

And you can tell people YOU MADE IT, and they’ll think you’re some kind of pizza hero sent to save the world. Check out the full recipe and instructions over at Pillsbury.

And let’s just take a moment to thank the Pillsbury Doughboy.

THANK YOU, SIR, YOU ARE KIND AND GENEROUS.