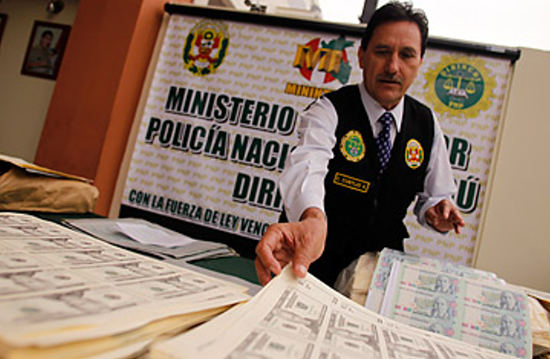 LATIN AMERICAN NEWS  – Police in Peru have reported that seizures of counterfeit dollars in 2014 were twice as high as the previous year, a pattern likely driven by the demand for fake dollars in economically unstable countries such as Venezuela and Argentina.

According to El Comercio, the fraud division of Peru’s investigative police (DIRINCRI) seized nearly $18 million counterfeit dollars in 2014, compared to nine million the year before. They credit increased cooperation with the US Secret Service — which established a Lima office in 2012 — as well as skyrocketing demand for US currency in some parts of Latin America.

“The increase in seizures could be due to a higher number of criminal acts and not the efficiency of the police,” one expert told El Comercio.

However, police dismantled a record five counterfeiting groups in 2014, according to a December 2 press conference given by Interior Minister Daniel Urresti. The latest bust occurred in November 2014, when police seized $3.7 million in fake cash. Criminal groups send fake money to Venezuela, Argentina, and the United States by using currency “mules,” who carry a mixture of counterfeit bills and real money on their person or in their luggage.

A policeman from the DIRINCRI told InSight Crime that Peruvian forgers had a huge market in Venezuela, where hunger for dollars and the presence of an immense black market was providing counterfeiters with a bonanza.

Peru has now reportedly become the largest producer of counterfeit dollars in the world. One US investigator told Global Post that 17 percent of fake dollars in the United States come from Peru. It isn’t limited to dollars either: Peruvian counterfeiters also forge euros and the local currency, nuevo soles.

Peruvian forgers are highly skilled and tend to use offset printers and other intricate techniques, unlike US based counterfeiters who mostly use photocopiers.

Yet it is Latin America that is providing the boon for Peruvian counterfeiters, where an appetite for US dollars in countries like Venezuela and Argentina is driven by prolonged financial crises and strict foreign exchange controls.

Not only do black markets offer staggering exchange rates for dollars — in Venezuela, one US dollar could fetch up to 173.8 bolivars in mid-January 2015, compared to an official rate of just 6.3 — but the clandestine nature of those markets makes it easier for forgeries to be passed into circulation.

QCOSTARICA - Mexico has been one of the favorite...
Economic Recovery