The Anatomy of a Colombia Prison Extortion Call 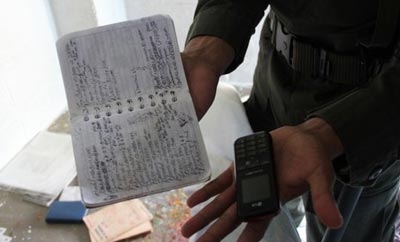 TODAY COLOMBIA – Over 400 cases of extortion were perpetrated by prisoners last year in Colombia, reflecting the ease with which this crime can be carried out from within the country’s prisons using trickery and intimidation.

Colombia’s anti-kidnapping and anti-extortion agency (GAULA) registered 407 extortion cases that were perpetrated from within the country’s prisons in 2014, reported Caracol. This figure represents 8.4 percent of the 4,848 total extortion cases reported by the GAULA last year.

Prisoners typically conduct extortion operations using cellphones, but their methods for swindling those on the outside vary. Inmates sometimes pass themselves off as police officials, telling the victim that he or she has to send money in order to free a detained relative, as evidenced by the recording below, which was obtained by El Espectador.

Inmates also use the aliases of criminal leaders from groups like the Urabeños and the Rastrojos or the names of Revolutionary Armed Forces of Colombia (FARC) commanders to intimidate their victims (as in the recording below).

According to the GAULA, in 2014 reports of extortive calls enabled authorities to prevent around $296,000 in extortion payments from falling into the hands of inmates, reported El Espectador.

The recordings of extortive calls published by El Espectador are indicative of the shift in Colombia in recent years to “micro-extortion” operations, in which perpetrators target individuals — rather than businesses — and sometimes use trickery instead of intimidation to coerce a victim into making payments. Previously, extortion was principally the domain of guerrilla groups and paramilitaries who levied fees against large mining and oil companies.

For years, authorities in Colombia have struggled to prevent extortion operations run from within the country’s prison system. This is despite efforts to limit the ability of inmates to communicate with the outside world by blocking cellphone signals around prisons. However, the August 2014 dismantling of an extortion ring operating from several different prisons and cities in Colombia suggests that such rings are becoming increasingly sophisticated.

Prisons in Colombia and throughout Latin America are often centers for criminal activity, and the relative ease with which extortion operations can be conducted makes them an attractive source of revenue for inmates. All that is needed is a cellphone, which prisoners can easily obtain — for the right price — through a black market system. The low overhead and limited resources needed to carry out extortion operations are fueling an explosion in extortion cases throughout Colombia, where reports of the crime increased fourfold from 2008 to 2013.