Plans for Ciclovía (Bike Path) in San José Still A Only A Dream! 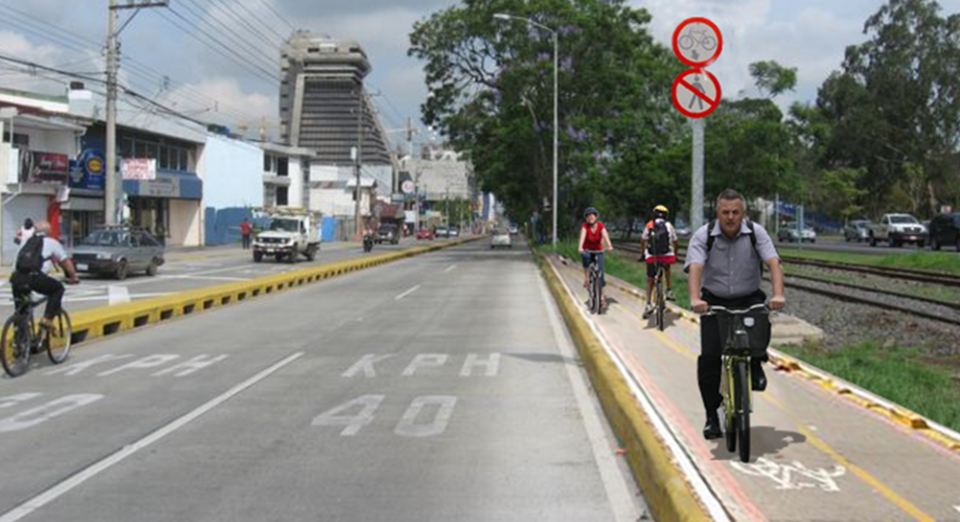 COSTA RICA JOURNAL — The project to build a ciclovía (bike path) in San José, is designed, planned and even mapped out for the last five years by the  Asociación de Deportistas Contra la Violencia Vial y el Irrespeto (ACONVIVIR).

Yet, despite receiving technical approval last November by the Ministerio de Obras Públicas y Transportes (MMOPT), the project is still not a reality.

The ACONVIVIR (Association of Athletes Against Road Violence and Disrespect) plan calls for bike path between the Legislative Assembly building in San José to La Saban park.

“The first phase of the project, mostly 70-80% of it moves along the boulevard of Avenida 4, along a  ‘bike lane’ with the paving stones marked to give bicycles the right of way,” said Marco Vinicio Corrales, Gerente de Provisión de Servicios de la Municipalidad de San José (, Service Delivery Manager for the City of San Jose).

The next phase of the project would be to continue the ciclovía to La Sabana park on th west side and to the Universidad de Costa Rica (UCR) on the east, a route that would take 15 minutes, and without the worry and dangers of vehicular traffic.

But the project still has no clear path. The approved section is not yet marked off, there are no signs and there are complaints of merchants and pedestrians, according to Corrales.

“The city official says the cost is relatively low, about ¢30 million colones (US$55.000 dollars) in materials if the City could coordinate efforts with the MOPT,” said the city official, who added that a sit down with the MOPT minister is in the planning stage.

For the unfamiliar with San José city politics, although the roads are within the limits of the City of San José, they fall under the jurisdiction of the MOPT. In the last several years, the City has been carrying out a number of roads works projects, but any major changes, like closing off a lane for bicycles or pedestrians would be a central government decision.

The project may still become a reality. Last week, a group of legislators: Antonio Álvarez Desanti of the Liberación nacional (PLN), Marcela Guerrero  of the Acción Ciudadana (PAC) and Ronald Vargas  of the Frente Amplio (FA) gave their support to the initiative by presenting the forum “Movilidad Urbana: ciclovía para San José” (Urban Mobility: bike path for San Jose), which not only sides with bikers, but also in defence of a healthier environment.

The forum centred on initiating searches for clean energy and less dependence on oil and to have a country with other methods of mobilization, such as cycling.

Earlier this month the city of Cartago began a bike program to move thousands of people daily.

Everyone sees the need for the project for San José. What it lacks is… money.

QCOSTARICA - The news of the reinstatement of the...
Economic Recovery