The number of complaints filed against police, accusing officers of abuse, has risen drastically during the last few years, although Security Minister Mario Zamora says that the situation looks worse then it is. 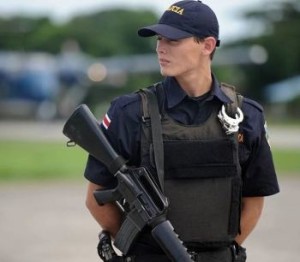 In 2012 alone, the 15 judicial jurisdictions received 2,061 complaints compared with the 1,196 filed in 2008, the 865 increase being an average of six per day in 2012. But Zamora points out that many more arrests were made last year than seven years ago, so the situation is not nearly as dire as it might seem.

If the rise seems serious, it is not for lack of laws protecting citizens from police brutality. In fact, even private guards and bouncers in bars are under scrutiny of the law, although they are covered by civil liability, not the criminal abuse of authority statues that curb public officials.

The cases that do make to the light of day warrant headline in this country, as in the case of Mayron Joel Cabrera, 20, who was beaten by a guard at the OIJ holding cells in Goicoichea, a case in which there is little doubt because the beating was filmed by security cameras.

OIJ agents, the elite investigation agency of this country, had to arrest 10 of their own for participation in the aggression. The fight started, Cabrera says, simply because he rubbed the OIJ guard the wrong way. The prisoner, accused of robbery, requested and received a transfer to another prison to avoid vengeance.

Despite the increased frequency of complaints for abuse of authority, only 16 public officials were convicted and charged in 2012. But this is not the only avenue of appeal open to citizens–a recent Sala IV decision says the state is liable for both actual and punitive damages in cases where it is proven.

In Cabrera’s case, the security cameras back up his story but in many abuse cases the proof is lacking because police brutality is more apt to occur in areas isolated from prying eyes. Also, most accusations are likely an example of the criminal mentality in which the criminal considers himself at war with society and its authority.
Article by Costa Rica Star