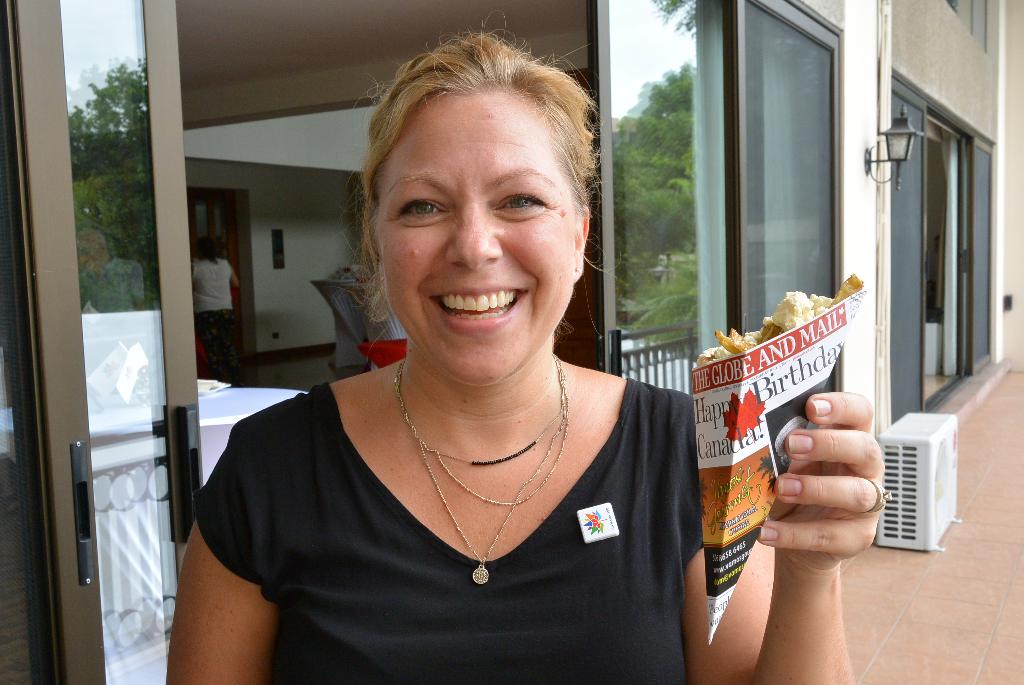 TODAY IN COSTA RICA – There was Poutine, Montreal smoked meat, Canadians, and Costa Ricans, but not a Mountie in sight, for the Canada Day celebrations at the official residence of the Canadian Ambassador in Costa Rica, on Saturday.

Ambassador Micheal Gort was a gracious host, taking the time to meet and chat with every one of the people 150+ who attended the event in Escazu.

Ambassador Gort, who has worked in the Canadian civil service since 2003 with an emphasis in development, before accepting the post of ambassador to Costa Rica, he served as Canada’s permanent representative to the Food and Agriculture Organization of the United Nations in Rome. Gort also represents Canada in Honduras and Nicaragua.

The event was organized by the volunteers of the Canadian Club of Costa Rica, led by the forever young and energetic Joan Dewar, that holds the annual Canada Day celebrations.

Toronto born and raised Chef D aka Dom and his wife Angela provided a taste of home for the many Canadians living in Costa Rica, with the ‘blow you away’ Reuben sandwich (chef cured and smoked Montreal Smoked Meat – aka Pastrami – piled high on freshly baked rye bread) and Poutine, a dish originating from Quebec. Chef D’s poutine used fresh local (Costa Rican) potatoes and cheese curds (cuajada de queso in Spanish).

The invitational only event this year was sponsored by Canadian businesses in Costa Rica like Scotiabank, Air Canada, EBI, La Republica and Unibrands, who made sure anyone with a sweet tooth got their Voortmans.

And for the lighter side of Canadians

One of the many, many things Canadians are good at is self-deprecating humour (for all our readers south of the Canadian border, that is the way the way is spelled in Canada). In light of Canada Day, we thought some classic one-liners (courtesy of Vancitybuzz.com) will have you smirking.

1. How do you get a Canadian to apologize?

Step on their foot.

2. What do the Toronto Maple Leafs and the Titanic have in common?

Both look good until they hit the ice.

Did you here the guy with the map of Canada tattooed on his butt?
Every time he sits down, Quebec separates.

4. How many Canadians does it take to change a light bulb?

None. They don’t change lightbubls, they accept them they way they are.

5. How many Torontonians does it take to change a light bulb?

Just one. Thet hold the bulb up to the socked and wait while the world revolves around them.

6. How many Oilers fans does it take to change a light bulb?

None. They just sit around in the dark and talk about how good the light bulb used to be.

7. How do you get 50 Canadians out of a swimming pool?

You say: “Please get out of the swimming pool.”

8. What do you call a sophisticated American?

9. In Canada, the seasons are:

10. Why did the Canadian cross the road?

He saw some American do it on TV.