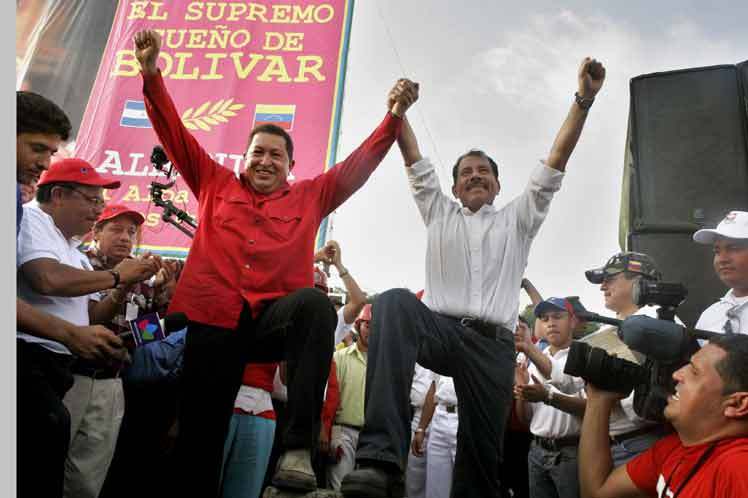 TODAY NICARAGUA (Prensa Latina) Nicaraguan President Daniel Ortega on Sunday highlighted the impact of the revolutionary work of Venezuelan President Hugo Chavez on Latin America, on the 4th anniversary of his death.

“Chavez (1954-2013) lives in all Latin America, he liberated our region with a great force and success, and we are here to continue his battle against poverty and social exclusion,” Ortega said.

Ortega arrived in Caracas on early Sunday to participate in the 14th Special Summit of the Bolivarian Alliance for the Peoples of Our America-People’s Trade Treaty (ALBA-TCP), during which he will pay tribute to the leader of the Bolivarian Revolution.

“We come here to pay tribute to Chavez’ work and legacy, which is part of the ALBA, based on the foundations of integration,” stated Ortega.

“The ALBA was a wish by Chavez and the leader of the Cuban Revolution, Fidel Castro (1926-2016), two champions of Latin American and Caribbean integration who are present in this struggle that we are waging today,” he said.

More than 200 dignitaries of the world invited to the event arrived in Venezuela this past weekend, including Cuban Foreign Minister Bruno Rodriguez, and the head of Bolivian diplomacy, Fernando Huanacuni.