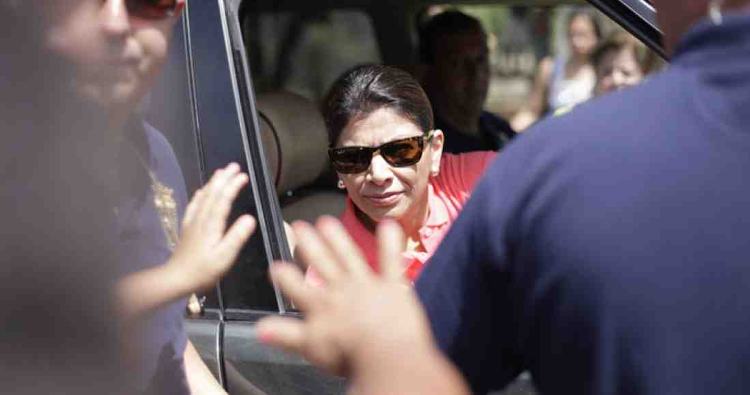 By: Arianna Mckinney, VozdeGuanacaste –  A little after 9 am Tuesday, July 23, President Laura Chinchilla’s helicopter touched down in the plaza of Maquenco in the Canton of Nicoya, thus avoiding possible barricades from protestors who have threatened that they would prevent her from entering the province of Guanacaste.

The president arrived to inaugurate the new EBAIS clinic in Maquenco, which belongs tio the district of Belen and services the communities of Maquenco, Chinampas, Terciopelo, San Francisco, Platanillo, Naranjalito, San Josecito and Cuesta Grande.

According to Guillermo Cardenas Sanchez, president of the Maquenco Health Committee, they received word two weeks ago that the president might attend but didn’t get confirmation until last Wednesday. Then the time of her arrival, originally scheduled for 2 p.m., was changed to 9 a.m.

The president stayed for about 45 minutes, enjoying the presentation of typical dances, posing for photos with the kids and offering words of congratulation.

Afterward she left in helicopter for her next engagement while community members continued celebrating with a lunch of chicken, pork and arroz con pollo.

Cardenas said he is very content and excited about the inauguration and “grateful to God because he let us achieve this with the effort of many people.”

Neighbors have struggled for about right years to build a new clinic since the former clinic was in poor condition. The community donated the 1530-square-meter property and the Costa Rican Social Security funded the construction with 235 million colones ($470,000), according to Cardenas. The clinic will begin operating on Monday, July 29. It is open for consultations Mondays and Thursdays, attending 25 to 30 patients per day.

- Advertisement -
Paying the bills
Previous articleFurore, Italy
Next articleNicoyans Can Now Resort to the Flagrancy Court of Santa Cruz