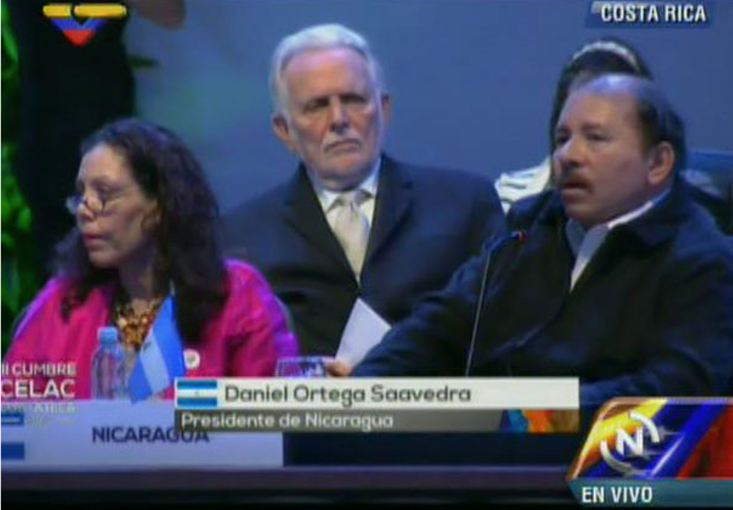 QCOSTARICA – Although the governments of Costa Rica and Nicaragua have been at odds for many years, yesterday, however, it got personal between Nicaragua’s President Daniel Ortega and Costa Rica’s Luis Guillermo Solís.

It was during the CELAC summit (now ongoing in San Antonio de Belén, Heredia) that Ortega yielded part of his alloted speech time to Ruben Berrios, president of the Puerto Rican Independence Party, triggering an exchange of words beteer Solis and Ortega.

Ortega gave his time to allow Berrios to ask the CELAC to rule in favour of Puerto Rico to become independent of the United States.

The Nicaraguan president rose from his chair to allow Berrios to sit and read his speech; he took the opportunity to advocate decolonization and for independence of a Puerto Rican state.

Solis in his capacity as president pro tempore of the CELAC, took the microphone and told Ortega that procedures must be respected, that there already was an agreement on that issue.

On Tuesday,  deputy Foreign Ministers agreed not to rule in favor or against the independence of the island but reiterate the statement issued during the Second CELCA Summit held in Havana, Cuba, to support the work of the United Nations (UN) decolonization committee.

Upset with Solís, Daniel Ortega interrupted him to externalize his dissatisfaction.

The Nicaraguan president complained that Solís that he had given the floor to the Organization of American States (OAS), “the Yankee instrument of colonization.”

“Puerto Rico’s voice is the voice of Nicaragua, so I ask a little respect,”  Ortega told Solís.

To which Solis said: “As has been the custom in previous summits, the presidency has invited who it found necessary to inform on the regional process … I simply made an observation regarding procedures and that’s it Mr. President, there is no decision to undermine the will of the Republic of Nicaragua … if you feel offended, I apologize, because that was not the intention of the Presidency, simply it was to maintain procedures.”

This was the first meeting between Ortega and Solís since he became president last May.

Costa Rica’s Foreign Minister Manuel Gonzalez, downplayed the situation, saying it “was just an exchange of views” and far from an altercation.

Ortega’s support for the independence of Puerto Rico is not new, he has been externalizing a similar criteria since 2011 in Caracas, in Chile in 2012 and Cuba last year.

QCOSTARICA - Leafcutter ants are ubiquitous in Costa Rica, except for...
Read more

TODAY VENEZUELA – On the streets of Venezuela, dollar bills that have been punctured, erased, stained, scratched, discolored, or burned are bought for half...
Trends

Andrey Amador Bikkazakova is the first Costa Rican to compete in the Tour de France as a professional road bicycle racer. Andrey rode with...
HQ

QCOSTARICA - Health authorities said on Thursday they will maintain the vaccination against COVID-19 of vulnerable groups despite the notification from Pfizer it would...
Photos of Costa Rica

QCOSTARICA - 50% of the tax revenue collected by the Ministry of Finance is used to pay the salaries of public employees, according to...
Coronavirus

TODAY PANAMA – With a sideways view of the syringe, nurse Violeta Gaona received the first dose of the vaccine against covid-19 in Panama...
Panama

Q24N - The Executive Board of the International Monetary Fund (IMF) approved on Tuesday, January 19, Panama’s request for a two-year arrangement under the...