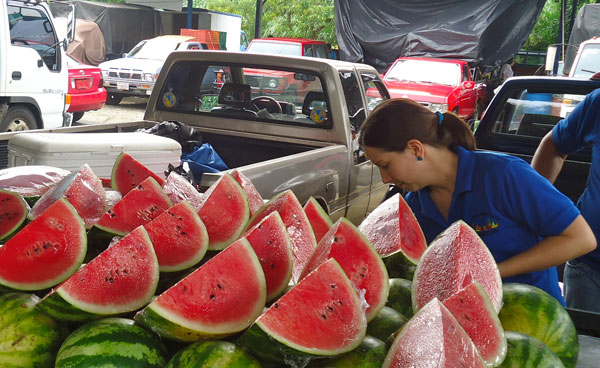 QCOSTARICA – Prices of food and soft drinks reported last month, had the biggest price increase in the last four years.

The cost of these products rose by 7.33% in January, compared to the same period in 2014, according to the Consumer Price Inces (Spanish: índice de precios al consumidor or IPC), released yesterday by the National Institute of Statistics and Censuses (INEC).

This is the biggest increase since March 2011, when the index for the group of products reached 7.82%.

Despite the increase, the overall inflation in Costa Rica in the last 12 months was 4.39%, within the range of 3% to 5% expected by the Central Bank.

Responsible for the rising prices in the food group and soft drinks were fruits and vegetables. According to the INEC, the price of fruits increased 20.7% and vegetables, 15.4%.

The Agricultural sector blames climactic factors. “We have had droughts in some parts of the country. Then, downpours and hail in other areas. And in recent weeks, strong wind gusts that have affected crops in upland regions,” said Guido Vargas, secretary general of the Union of Small and Medium National Farmers (Upanacional).

Juan Rafael Lizano, President of the National Chamber of Agriculture and Agribusiness, emphasized that the lower supply of agricultural products immediately gave rise to prices.

Mario Montero, executive director of the Costa Rican Chamber of Food Industry, said that although the cost of some raw materials fell, prices of products made in the country did not.

QCOLOMBIA – The violence registered in different cities across Colombia during the last five days of massive protests against the controversial tax reform, has...
Business

QCOSTARICA - The Cooperativa Autogestionaria de Servicios Aeroindustriales (COOPESA), the Costa Rican company that started as a manufacturer of bus bodies until 1993, and...
Mexico

QCOSTARICA - A new batch with 124,020 doses of the covid-19 vaccine landed on national soil this Tuesday night, as part of the weekly...
El Salvador

Q24N - The president of El Salvador, Nayib Bukele, announced on Monday the possibility of continuing with the removal of officials, two days after...
Mexico

Q24N - An elevated section of metro track in Mexico City partially collapsed on Monday night, bringing down rubble and some train carriages onto...
Health

QCOSTARICA - In order to maintain the rate of vaccination against covid-19 in the health areas that show the greatest progress in this process...
Infrastructure

QCOSTARICA - With a mega-complex of more than 153,000 square meters (1.65 million square feet), comprised of 16 ministries would be located in eight...