Proposed Metro (Subway) For San José Could Be Ready In 2021

The first of the three lines proposed by the CFIA would cost US$600 million dollars and be ready in 2021, to meet the country’s carbon neutrality goal and in celebration of the 200th anniversary of independence,  CFIA president Max Umaña announced on the radio program, Nuestra Voz.

Max Umaña, said that a committee of five engineers was created 11 months ago, to analyze the feasibility of a building a subway for San José. 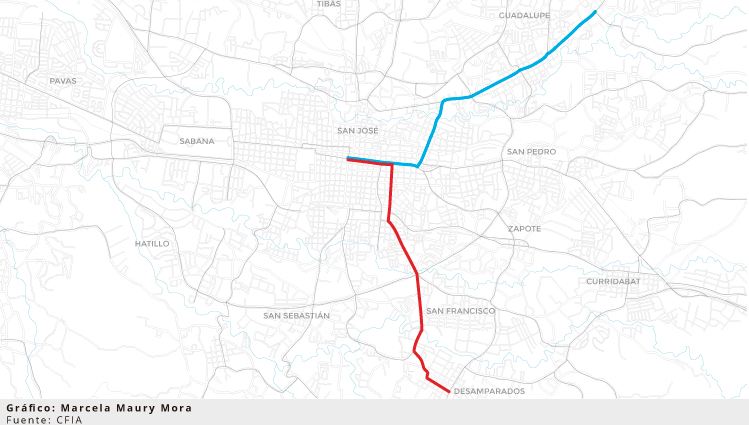 According to Umaña, the choice of first connecting the areas of Desamaparados, Guadalupe and San José is based on being the most populated of the metropolitan area. The other three subways lines the CFIA proposes would link San José to Curridabat, San Pedro, Pavas, Alajuelita, La Uruca and Tibás.

According to the president of the CFIA, a subway would reduce travel time between Desamaparados and Guadalupe from an hour to ten minutes.

“We think San José should have a first class transportation system. People spend much of their life and time travelling from one place to another. If we execute this plan it will result in more production time and more time for people to spend with their families and less stress,” said Umaña.

Erick Bogantes, engineer and representing the Colegio de Ingenieros Eléctricos, Mecánicos and Industriales, said that they have met with Guillermo Santana, president of the Instituto Costarricense de Ferrocarriles (Incofer) and later this month will be meeting with the ministro de Obras Públicas y Transportes (MOPT), Carlos Segnini, to discuss the viability of the plan.

Segnini says he supports the construction of a subway that  is necessary to decongest the capital and is positive on the CFIA plan.

“I’ll sit down and talk to them. If we are able to build a subway, Costa Ricans would be very happy,” Segnini told Amelia Rueda, host of Nuestra Voz.

Panama Metro
Last April, Panama was the first Central American country to inaugurate a subway to alleviate the booming that country’s capital dreadful traffic. But critics say the US$2 billion spent on the 14-kilometre rail line would have been better used building a higher-capacity surface transport network and expanded bus system.