QTips: Boiling Water In The Microwave 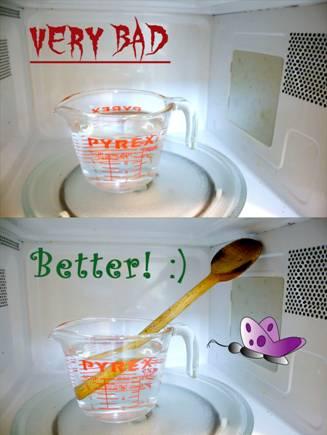 Boiling water in the microwave is something we have all done. And although it appears harmless, there is a danger in boiling water alone.

This is a true story. A 26-year old deciding on a cup of coffee, took a cup of water and put it in the microwave to heat it up (something that he had done numerous times before).  He wanted to bring the water to a boil. When the timer shut the oven off, he removed the cup from the oven.

As he looked into the cup, he noted that the water was not boiling, but suddenly the water in the cup ‘blew up’ into his face. The cup remained intact until he threw it out of his hand, but all the water had flown out into his face due to the build-up of energy . His whole face is blistered and he has 1st and 2nd degree burns to his face which may leave scarring.

He also may have lost partial sight in his left eye. While at the hospital, the doctor who was attending to him stated that this is a fairly common occurrence and water (alone) should never be heated in a microwave oven. If water is heated in this manner, something should be placed in the cup to diffuse the energy such as a wooden stir stick, tea bag, etc, (nothing metal).

Here is the response from a major microwave manufacturer on the subject.

Microwaved water and other liquids do not always bubble when they reach boiling point. They can actually get superheated and not bubble at all. The superheated liquid will bubble up out of the cup when it is moved or when something like a spoon or tea bag is put into it.

To prevent this from happening and causing injury, do not heat any liquid for more than two minutes per cup. After heating, let the cup stand in the microwave for thirty seconds before moving it or adding anything into it.

Recruitment is a prolonged process for any organization that consumes both effort and time. Even though almost 82 percent of the recruiters prefer a pre-assessment...
Politics

QCOSTARICA - Legislator Ricardo Benavides lashed out on Tuesday that in the midst of the efforts to advance with the covid-19 vaccines the Government...
Political Economy

QCOSTARICA - Spain had excluded Costa Rica from the list of risk countries to enter by air for presenting a negative covid-19 test (RT-PCR,...
National

QCOSTARICA - The nighttime vehicle restrictions starting on March 1 will be from 11:00 pm and not 10:00 pm as this month, and on...
Travel

QCOSTARICA - Restricted borders, increased immigration patrols, limitations in transportation and movement and the pandemic has not deterred Nicaraguan migrants from arriving in Costa...
National

QCOSTARICA - Costa Rica will extend the restrictions of its land borders until April 1, confirmed Casa Presidencial (Government House) on Thursday. As in the...
Heredia