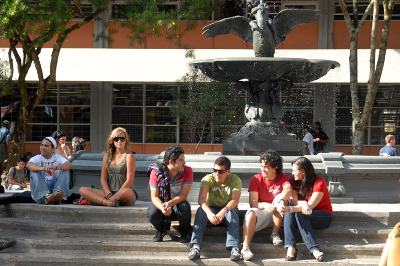 Costa Rica’s prized quality of life in the Central American region owes a lot to her focus on education. Since there is no military to spend money on, Costa Rica has had an opportunity to invest a greater portion of the national budget on academic affairs -particularly at the higher education level. As such, the number of colleges and universities in Costa Rica has increased along with the diversity and quality of educational offerings. The cost of tuition, however, is also on the rise.

According to a recent report by Central American business magazine Summa, Costa Rica ranks as the best country for higher education in Central America. These findings come from the 2013 QS Quacquarelli Symonds ranking of the best universities in Latin America, where the University of Sao Paulo in Brazil tops the list.

The two oldest and most prestigious universities in Costa Rica are considered the best in Central America: The University of Costa Rica (UCR) and the National University (UNA in Spanish); these are both public institutions. In third place is the Latin American University of Science and Technology (ULACIT in Spanish) is in third place; this is a private institution. UCR is ranked as the 26th most prestigious universities in Latin America.

Public Vs. Private
The seventh-ranked university in Central America is also a private institution in Costa Rica: Universidad Latina. The fact that public universities in Costa Rica rank higher than their private counterparts is consistent with public perception. Earlier this year, weekly business newspaper El Financiero published the results of a national survey about how Ticos feel about their beloved higher education system. More than 85 percent of people in Costa Rica feel that being a graduate of the Technology Institute of Costa Rica (TEC in Spanish) is the greatest honor.

TEC is one of the four major public universities, along with UCR, UNA and the distance-learning UNED. Merely getting into one of these universities, with the exception UNED, gives cachet to students who pass the rigorous admission exams and relief to their families who don’t have to worry about paying for private tuition. Herein lies the nature of the public vs. private debate in Costa Rica: Students who pass the admission test get a better education at a considerably lower cost than at private universities.

What is interesting about TEC’s perception among the people of Costa Rica is that it usually attracts students from working-class families in need of scholarships, which are plentiful in the public system -yet so popular that they often run out. TEC specializes in applied Science, Technology, Engineering, and Mathematics (STEM) subjects. It is important to note that the government of Costa Rica also subsidized private universities in some cases.

The Business of Higher Education
Completing a curriculum of higher education, complete with graduate school and course materials, at one of Costa Rica’s public universities costs about $10,000. This can be ameliorated with scholarships, subsidies and very reasonable student loans. In private universities, some financial aid is available; but, for the most part, cash is king.

In 2009, the average cost of tuition at private universities was about $1,800 per year, but it has been climbing at a pace higher than inflation since then. For example, a full load of six courses costs about $1,000 at many private universities, whereas it would only cost about $300 at a public institution of greater prestige.

Costa Rica is, by and large, a meritocracy with regard to career development. This means that individuals need to prove their academic advancement in order to advance in their careers or to make more money. This, in turn, means certificates, degrees and diplomas, which private universities are more than eager to issue -for a fee. This has caused a proliferation of dubious private universities in Costa Rica, and a few have been accused of churning graduates, but other have been accused of a more egregious activity, which is to act as diploma mills.

Sham Universities
Circa 2005, the growth of private universities in Costa Rica began to accelerate. By 2007, private universities were graduating students at double the rate than UCR, UNA, UNED, and TEC combined. One of the reasons behind this growth was the Free Trade Agreement and the sudden interest by foreign business investors in Costa Rica and her pool of talented and educated workers. There were plenty of jobs available for skilled workers, but these jobs also required a degree.

Many employers in Costa Rica, in both the private and public sectors, require their workers to obtain college degrees in order to get significant raises, advance in their career path, or get better jobs. For this reason, universities that offer night courses are experiencing even faster rates of growth since they are capitalizing on a higher number of Ticos who want to advance their careers and bring home a higher paycheck.

The demand for more university degrees among Costa Rica’s workforce has resulted in institutions such as the infamous Universidad Empresarial de Costa Rica (UNEM), which has been embroiled in a series of diploma mill scandals involving students that paid money for a degree that they did not earn through studies or academic competence. This is a school that has granted PhD degrees to professionals from the United States and Germany as well.

Aside from diploma mills, there are also the garage universities, which are dubious institutions of higher learning. These private universities are not diploma mills, but the quality of their curriculum and academic activities often comes into question. Critics of garage universities claim that they only exist to either indiscriminately collect tuition from students who know that they are far from getting a good education -but they are getting the coveted certificate of completion of studies that their jobs require.

Know-How Vs. Degrees
Technical and trade schools are part of a more promising learning sector that is also experiencing growth. The National Institute of Learning (INA in Spanish) is a public institution that graduates technicians who are ready to work. Their course catalog is extensive, and their focus is on teaching what students need to know to work at offices, free-trade zones, call centers, biomedical device manufacturing centers, tourism firms, banks, farms, laboratories, hospitals, public institutions, research centers, and more.

The focus of INA is on developing enough classroom and hands-on experience for students to easily get a job and advance by their own virtue as valuable workers. This runs counter to the meritocracy system, and it is part of a global revolution in the hiring of human resources. Several employers are now focusing on know-how and potential when they hire workers; case in point: former U.S. spy agency contractor Edward Snowden, who does not have a university degree.

Public and private learning institutes that get to the point and teach students how things are done in the modern workplace are beginning to emerge in Costa Rica (although INA has been serving the public for many decades). In the future, these burgeoning academies may give universities a run for their enrollment statistics since Ticos are warming up to the idea of learning a trade or skill, particularly related to the STEM fields, that will get them hired. Universities are already reacting to this looming competition by adding more hands-on learning. In the end, students will benefit with a more well-rounded education.