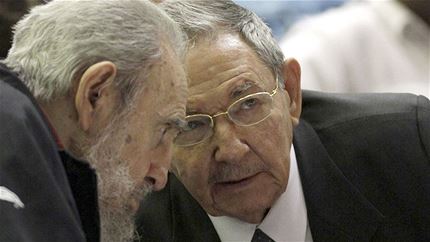 Cuba’s parliament has named Raul Castro to a new five-year term as president — which he announced will be his last — and rising star Miguel Diaz-Canel his first vice-president.

The 81-year-old Castro also said he hopes to establish two-term limits and age caps for political offices including the presidency — an astonishing prospect for a nation led by Castro or his older brother Fidel since the 1959 revolution.

Some constitutional changes are to be so dramatic that they will have to be ratified by the Cuban people in a public referendum, he said, though he added he was not named president in order to destroy Cuba’s socialist system.

Cuba is at a moment of “historic transcendence,” Raul told lawmakers in speaking of his decision to name Diaz-Canel to the No. 2 job. “It represents a definitive step in the configuration of the future leadership of the nation through the gradual transfer … of key roles to new generations.”

The 52-year-old Diaz-Canel is now the first in line to succeed Raul. He is the highest-ranking Cuban official who didn’t directly participate in the 1959 Cuban revolution.

The selections were reported by state media Sunday.

In a rare public appearance, Fidel attended the opening session of the National Assembly for only the second time since he handed over power to his younger brother Raul in 2006, due to ill health.

Fidel is still a member of the assembly.

Newly-elected legislators applauded as the brothers greeted them from the front of the room.

The youngest legislator to be elected, Lisette Condes Sanchez, read out the oath of loyalty that all members of the National Assembly have to sign.

Afterwards Fidel could be seen signing the oath.

His top two lieutenants are also in their 80s.

If a fresh face is named as one of Raul’s top deputies on Sunday, it could indicate that his administration is settling on who might carry the country forward when those who fought in the 1959 revolution can no longer do so

Raul has spoken in the past of implementing two-term limits for public officials up to and including the president, as well as the importance of grooming new leaders to take over from his graying generation.

This would be his second full term after formally assuming the presidency in 2008.

Raul is about halfway through a programme of key social and economic reforms that have already seen the expansion of private business activity, legalized home and car sales, eased restrictions on foreign travel and allowed the handover of fallow state land to independent farmers.