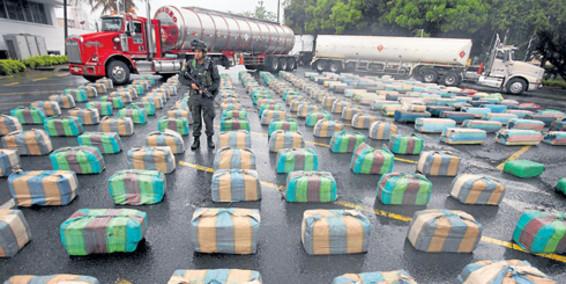 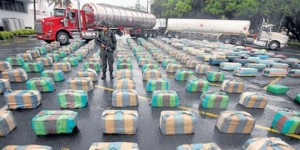 Authorities seized 347 tons of marijuana last year, 50 tons more than in 2012. The increase fits in with a long term trend that has seen seizures rise by 350 percent since 2008 and represents the biggest annual haul since 1993, reported El Tiempo

However, the official figures show authorities only seized 70 tons of cocaine in 2013, down from the record 241 tons seized in 2012.

Authorities also announced they had seized 375 kilos of heroin and 184,000 pills of synthetic drugs.

The continuing rise in marijuana seizures should come as no surprise. An estimated 70 percent of Colombian marijuana ends up on the domestic market, which in recent years has become an ever more important source of revenue for both criminal and rebel groups as they diversify their criminal interests.

The guerrillas of the Revolutionary Armed Forces of Colombia (FARC) in particular have cashed in on the domestic marijuana boom, and are believed to be behind the trade in two of the country’s main production centers — the southern department of Cauca and the eastern department of Meta.

The narco-paramilitary groups labeled the BACRIM (from the Spanish abbreviation for “criminal bands”) also have a role in the trade, and control production in the traditional marijuana heartland of the northern department of Magdalena, according to police.

However, the dramatic decrease in cocaine seizures is far more difficult to explain. While according to the United Nations, coca cultivation in Colombia has fallen, cocaine production has remained stable, and has certainly not decreased sufficiently to account for such a drastic drop.

This leaves the possibility that drug traffickers have successfully adapted to counter interdiction efforts after losing a record haul in 2012 by increasing use of sophisticated and difficult to detect trafficking techniques, such as the use of submarines, or through new methods or tactics.

Whatever the reason, the decline is a stark reminder of the adaptability of drug traffickers, who inevitably respond to interdiction successes by evolving, not by abandoning their lucrative business.