COSTA RICA NEWS – The construction of the new hangar of the Cooperativa Autogestionaria de Servicios Aeroindustriales (Coopesa) is expected to begin later this year, paving the way for expansion of the Juan Santamaría (San José) international airport.

With the plans and designs for the new Coopesa facilities approved last month by the Organización de Aviación Civil Internacional (OACI), Alvaro Vargas, head of the Dirección General de Aviación Civil (DGAC) – Civil Aviation, says construction could begin in the first half of this year.

The current Coopesa hangar, used for aircraft repair and maintenance, sits immediately west of the customs terminal, impeding any expansion of the main terminal.

The relocation of Coopesa facilities is part of the government’s commitment to Aeris, the manager of the airport.

Aeris has been managing the San Jose airport since 2009, when it purchased 95% of the stock of Alterra Partners.

The lands where Coopesa sits now will be used to construct a new 10.000 square metre structure, to accommodate six aircraft and at a cost of US$34 million dollars.

Given the delays in resolving the Coopesa issue, Rafael Mencia, Aeris general manager, said that the construction of Plan B, the expansion of Block G to the east of the existing facilities, will be done first.

Plan B, at a cost of US$16 million dollars, consists of constructing two new boarding gates to accommodate larger aircraft.

Plan B should be finished by November 2015. 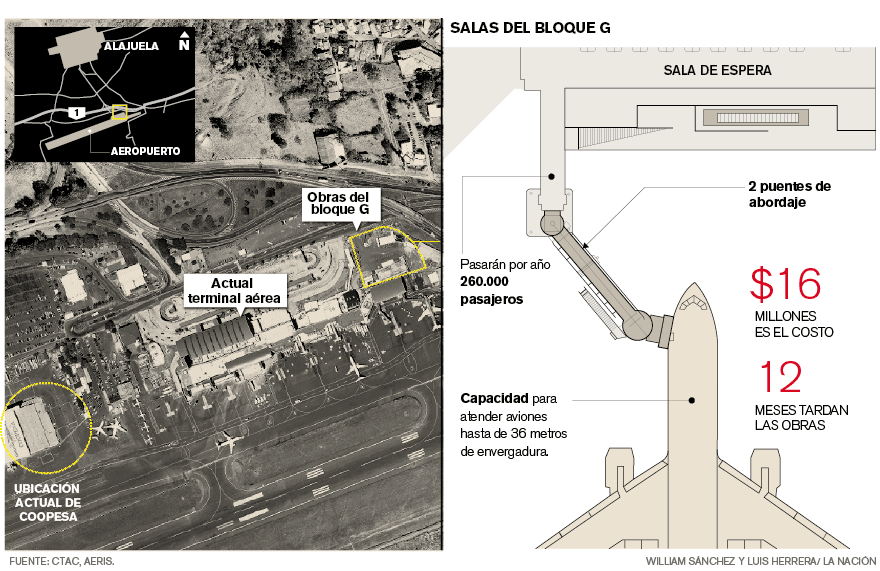