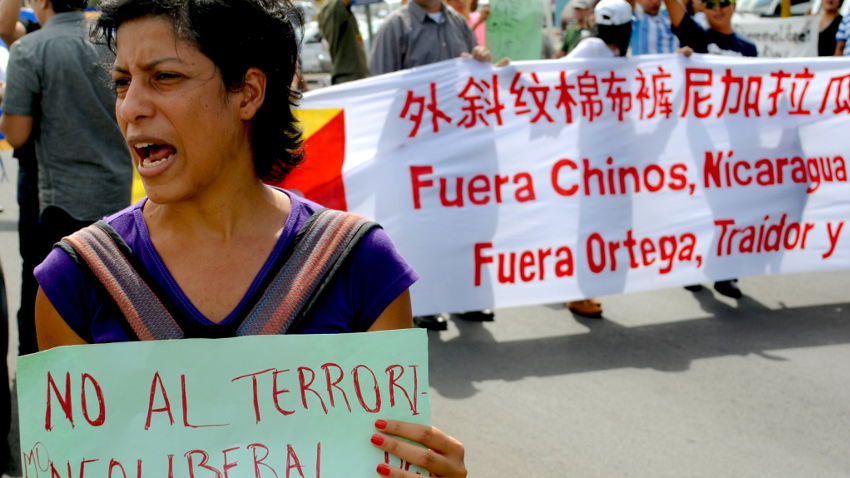 TODAY NICARAGUA – Nicaraguan police has released all  six leaders of the campesino Land Defense Council after more than 150 hours of illegal detention.

The campesino leaders, local organizers of a group that has vowed to defend landowners from forced expropriations for the Chinese canal project, all showed signs of being beaten, according to witnesses.

The anti-canal protesters were among the 47 campesinos who were beaten and grabbed during a violent Christmas Eve clash with riot police.

More than a dozen Nicaraguans are reported missing and six more illegally jailed after a series of violent Christmas Eve clashes between riot police and campesinos who are organizing to defend their land against a mysterious Chinese billionaire’s canal project.

The government of Sandinista President Daniel Ortega has already released 41 of the anti-canal protesters — farmers and cowboys — who were broken and bruised during police beatdowns in southern and central Nicaragua. But six leaders of the campesinos’ Land Defense Council are still locked-up without charges somewhere in the bowels of Managua’s infamous El Chipote Prison, the same cells used by the former Somoza dictatorship to torture political prisoners decades ago.

According to testimonies from the released prisoners, the group’s incarcerated leader, Octavio Ortega (no relation to the president), is in critical condition. He was allegedly beaten brutally to the point where he urinated blood and was bleeding out of one eye. Police have refused to comment on the allegations, and human rights activists have been denied access to the prison to see him.

“This is no longer a dictatorship lite, this is a now a full-blown repressive dictatorship that is baring its claws and releasing its dogs,” Vilma Nuñez, head of the Nicaraguan Center for Human Rights, told Fusion.

Nuñez says the Sandinista regime has reportedly started a methodical “manhunt” in the countryside to find other anti-canal protesters who eluded capture on Dec. 24. She said police officers and soldiers are reportedly going “door-to-door” throughout the countryside trying to find those responsible for this week’s roadblocks in Rivas, El Tule and San Miguelito. Sandinista authorities have not commented on the alleged persecution.

“This canal is already stained in blood,” Defense Council member Henry Ruiz, who avoided capture during this week’s police raids, told Fusion on Friday afternoon. “We are going to hold firm, we will not back down. And they are going to see what happens as more Nicaraguans join this movement.”

The ruling party, meanwhile, has dispatched members of its Sandinista Youth to occupy the streets of Managua as a show of force to deter others from protesting.

On Friday afternoon, Sandinistas on motorcycles circled a group of protesters who were calling for the release of prisoners still held in Chipote. The so-called motorizados, a ragtag rapid-response biker gang, impeded the group from marching to the jail. But the street pressure worked; a second batch of prisoners was released two hours later.

For all the photo visit Today Nicaragua

The Nicaragua canal project hasn’t broken ground yet, but it has already divided the country deeply. Opinion polls show that most Nicaraguans are in favor of the canal, but those with the most to lose — the 7,000 families whose properties will be forcibly expropriated — are making the most noise. And they’re winning converts in the process.

At a bizarre groundbreaking ceremony on Dec. 22 (the only breaking of ground was done on a construction access road), Chinese concessionaire Wang Jing announced that real construction is now scheduled to begin at the end of 2015, which made the confetti-drop seem premature.

But the Sandinistas and opposition forces aren’t waiting for the bulldozers — they’re already digging trenches of their own in anticipation of a prolonged battle for the future of the country.

The opening shots were fired this week during Wang’s brief visit to Nicaragua for his mega-super-fun access-road extravaganza. Wang’s presence in the country triggered a series of anti-canal protests by farmers and cowboys who insist their land is not for sale to the Chinese.

Protesters blocked the interior highway to El Tule and the Inter-American Highway through Rivas, a chokepoint south of Managua. One group hijacked an oil tanker and threatened to turn it into a giant fireball.

That brought the riot cops out, truncheons swinging, teargas popping and rubber bullets whizzing. The dust-up was brutal and swift. When the chemical cloud lifted, between 40-60 people were missing and dozens injured, based on different accounts.

Nicaragua’s top cop, Aminta Granera, told Sandinista media that 33 people were arrested and 21 injured, mostly her officers. She said the police action restored public order and justified the use of force. “We’re going to safeguard security and won’t allow, under any circumstances, people to threaten someone else’s life.”

By Friday afternoon, police released 41 campesinos —with no attempt to explain the discrepancy from their previous claim that only 33 people were in custody.

“The prisoners were badly beaten and injured,” human rights leader Marcos Carmona told Fusion on Friday night, shortly after police released the prisoners to his custody. “We are documenting the police brutality now to denounce the situation to the international community.”

Human rights activists say the escalation of protests and repression does not bode well for the year ahead. To that point, protest leaders say they’re already planning to ratchet up anti-canal demonstrations in a way that will get noticed around the world.

“We are going to make the international community — all the international tourists who come to Nicaragua — see the government repression,” said veteran rabble-rouser Carlos Bonilla, who has been at the center of various anti-government protest movements over the years. “We’re going to block roads, prevent tourists from getting to their beach destinations, and make them see the chaos and confusion in Nicaragua.”

QCOSTARICA - Almost ¢140 billion colones (US$227 million dollars) is the amount the MECO construction company was able to snare for public works contracts...
Reports