Even though it is among the most powerful newspapers in Latin America, La Nacion has its severe critics. But no matter how it may conflict with one’s political sensibilities, one must admit — they are brutally frank about all politicians. 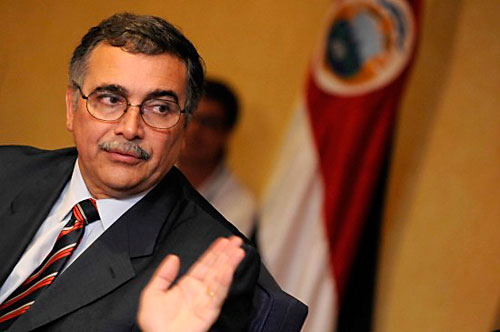 As secretary general of National Liberation party in 2007, he was arrested for drunk driving after smashing into two cars and attempting evade police. Yet, only two years later, he was very visible as Laura Chinchilla’s campaign manager.

After winning the election, Chinchilla appointed him as her Foreign Minister. But then came the San Juan River crisis and he was blamed for not taking a harder line. Despite a storm of criticism, the still-new President shifted him over to the Environmental and Energy Ministry.

It might have seemed that he could stay out of hot water in that post (although even there he was not loved by environmentalists). But when the Comptroller General’s office torpedoed plans for the $1.5 billion new petroleum refinery at Moin in Limon, Castro’s defense was that feasibility and profitability studies were at fault.

That cost, wrote the analysts, RECOPE president Jorge Villalobos his job — but so far, Castro hangs on. Even members of his own party have blasted his role.

Castro has been Environment Minister twice, the first time being under President Jose Maria Figueres (1994-96). He claims to have become interested in the environment when he served as deputy minister of Governmnet under President Luis Alberto Monge (1982-86).

In the latter role, he made a tour of Corcovado National Park where gold miners were working. Castro threw the miners out of the park with a great fanfare. They returned as soon as the last policeman had left the park.

During tjhe eight years after his stint with Monge, Castro followed the advice of another President, Oscar Arias, and studied at Harvard in the U.S., getting his Masters and Doctorate degrees in Environmental Economy. But, La Nacion noted, he collided with President Figueres on Castro’s plan to install another petroleum refinery, which Figueres felt contradicted a “green country’s” image.

President Chinchilla named him Foreign Minister despite the fact that he had no diplomatic experience. Longtime diplomat Carlos Roverssi, his vice minister, had many arguments with Castro. After 14 months in the job, Castro was hastily bundled off to the Environment Ministry.

It was during those 14 months that Castro overruled his deputy Roverssi and made a trip to Managua after which he told congress there would be “no problem” from Nicaragua’s plan to dredge the San Juan — which directly led to the confrontation and invasion of this country. (See previous articles.)

Will Castro survive until the end of Chinchilla’s term in May of next year? Don’t count him out.

QCOSTARICA - The value of Costa Rica exports increased by 23% in the first five months of the year, being the highest growth in...
Cine (Movies)